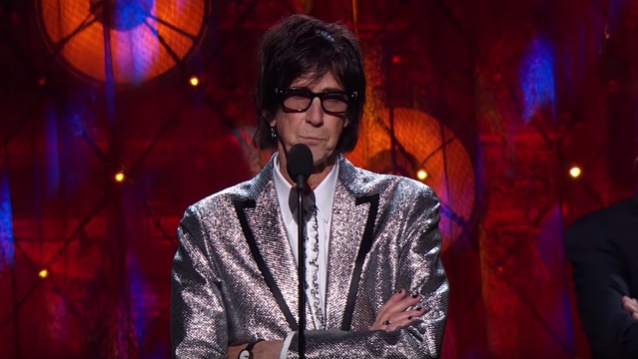 Members of GUNS N' ROSES, KISS, TWISTED SISTER, WEEZER, RED HOT CHILI PEPPERS, SACRED REICH, TESTAMENT, SLASH FEATURING MYLES KENNEDY AND THE CONSPIRATORS and DANKO JONES are among the rock musicians who reacted on social media to the passing of Ric Ocasek, the guitarist and leader of THE CARS, who was found dead in his Manhattan apartment yesterday (September 15) at age 75.

According to Rolling Stone: "At approximately 3 p.m. ET, police officers responded to a 911 call at Ocasek's home [on] 19th Street. Officers discovered Ocasek unconscious and unresponsive. He was later pronounced dead at the scene, though no cause of death has been revealed."

Ocasek is survived by six sons, two from each of his three marriages. At the time of his death, he was estranged from his third wife, supermodel Paulina Porizkova, whom he married after the two met while shooting the video for 1984's "Drive". The couple last year announced their separation.

Ocasek, who was born Richard Theodore Otcasek in Cleveland, and THE CARS had 13 Top 40 singles, including "Just What I Needed", "Best Friend's Girl", "Let's Go", "Shake It Up", "You Might Think" and the ballad "Drive". The band split in 1988 and reunited in 2011 for its first album in 24 years, titled "Move Like This". They were inducted into the Rock And Roll Hall Of Fame in 2018.

"THE CARS were the ultimate New Wave dream machine: a hook-savvy super-charged quintet that fused 60s pop, 70s glam and avant-rock minimalism into a decade of dashboard-radio nirvana," the band's biography reads on the Hall Of Fame web site.

In a 2018 interview with Rolling Stone magazine, Ocasek looked back at the history of THE CARS, saying: "It's kind of weird because it's like a lifetime. It is a lifetime. I had three families during that time. They are like lives that go by and millions of people and things and artists and writers and business people and fans... It's a lot of stuff. It's been a pretty eventful life, I can say."

Image courtesy of Rock And Roll Hall Of Fame

RIP Ric Ocasek. A very sad loss. My condolences to his family. https://t.co/0KXmMC0qEi

The weezer family is devastated by the loss of our friend and mentor Ric Ocasek, who passed away Sunday. We will miss him forever, & will forever cherish the precious times we got to work and hang out with him. Rest in Peace & rock on Ric, we love you. #RIPRicOcasek #karlscorner pic.twitter.com/JcTXevr6V8

So sad to hear that we have lost another one. Ran into Ric on the streets of NYC last year and we had a nice chat. Just two guys/no fanfare. I’ll always remember it. #RIPRickOcasek

Ahh man, say it ain’t so. I loved Ric Ocasek. What an interesting, smart, kind, funny man who made incredible records. I loved those Cars albums when I was a teenager. Perfect pop songs with those wicked elliot… https://t.co/SjtRU8OaJO

Rest in Peace Ric Ocasek. He not only wrote a ton of killer songs but also found the time to produce Bad Brains "Rock For Light" and the first Weezer record. Total badass. Peace and love on your next journey. ✌️❤️?? pic.twitter.com/0hL1NO3oDa

Very sorry to hear of the loss of Ric Ocasek. What a talent. #ripricocasek pic.twitter.com/iqG3aEcIq5

In the late 70’s, in between my obsessions for Kiss, the Ramones, The Clash & The Sex Pistols, I also was a big fan of The Pretenders, the B-52’s, the Police, Devo & The Cars...the 1st two albums are classics from start to finish. Sad to hear of Ric Ocasek’s passing #RIPRicOcasek pic.twitter.com/mlIBnVVL80

Awwwww Man..... Ric Ocasek was one of oddest, BEST Front Men EVER. The Cars! The TUNES! Ric Ocasek also showed Visionary taste in producing #BadBrains 2nd album Rock For Light. Am DEEPLY Bummed over this. Am a Cars FAN. https://t.co/yfz1yUyeuX


Back to back “one-two punch” for rock music in one weekend, damn. Eddie Money & just now, Ric Ocasek of The Cars . Full disclosure: In high school, my friends & I always gravitated more towards music that offended & defied convention: The screaming guitars of Van Halen & Ozzy, the screaming (literally) of Halford & Dio, the shock of Kiss & Alice, the complexity of Yes & Rush, the sexual boundary-pushing of Prince (& for that matter, Plant) the weirdness & cultural critiques of Zappa etc etc...But what’s interesting about both these guys’ work is that despite its relative “safeness” (it fit none of the above descriptions, was generally accepted by mainstream gatekeepers, was never threatened with censorship, didn’t cause concern by parent/teacher groups or DC Congressional Committees), it somehow occupied that safer space while being liked by those of us into the more unconventional (even dangerous, if you will) side of music. No, my friends & I didn’t wear Eddie Money or The Cars T-Shirts; we didn’t hang up their posters; we didn’t run out to buy their albums or attend their concerts..But you know what else we didn’t do? We didn’t turn the dial when they came on the radio (and these guys were ALL over the radio)! It may have been “safe” sure, but the songs were undeniably good, the hooks incredibly strong - so strong, in fact, that I can’t even look at titles like “Just What I Needed” & “Let The Good Times Roll” or “Shaken” & “Two Tickets to Paradise” without the songs getting stuck in my head! And I can only imagine their pressure to do some stupid gimmick or rely too much on image in their area of radio friendly rock, but they did not. Even after MTV, they kept it real, just a couple dudes who happened to make super-catchy, fun to listen to music. I met Eddie once - a former guitar tech of mine worked with him for many years - he struck me as down to Earth funny and a great guy. I have heard the same about Ric, though we never met. These two may be more associated with early mid 80s , an era long past, but they were great guys and true artists who will be missed & remembered for many years to come. RIP #eddiemoney & #ricocasek #Thecars