MEGADETH's albums "United Abominations", "Endgame" and "Th1rt3en" will be reissued on July 26 via BMG.

Thrash metal pioneers MEGADETH burst on to the scene in 1983, virtually inventing a genre and have earned their spot as one of metal's most influential and respected acts of all time. Over the course of its illustrious 36-year career, the band has sold more than 38 million albums worldwide, notched six consecutive platinum efforts, seven Top 10 albums, and has earned numerous accolades, including 12 Grammy nominations and a 2017 Grammy Award in the "Best Metal Performance" category for the "Dystopia" title track.

With sheer determination and a relentless recording and touring schedule, MEGADETH has worked their way up from headlining clubs to headlining arenas, festival and stadiums, cementing a legacy that continues to grow and spread throughout the world.

MEGADETH's 11th studio album, "United Abominations", was first released on May 15, 2007. Debuting at No. 8 on the Billboard chart, it was their highest debut since 1994's "Youthanasia". The album was voted No. 1 metal album of the year by several publications and was hailed by critics and fans alike as one of the finest of the band's career and was revered as their best in a decade.

The new reissue has been fully remastered by producer Ted Jensen (GUNS N’ ROSES, MASTODON, MACHINE HEAD, TRIVIUM) and includes rare bonus track "Out On The Tiles" on the CD — a cover of the LED ZEPPELIN classic. The record will also be on vinyl for the first time in over 12 years and again on CD for the first time in three years.

"Endgame" is the 12th studio album from these thrash metal legends and was originally released on September 15, 2009. Following on from the trends and acclaim of its predecessor, it earned several awards and praise from critics and fans alike — some calling it their "finest hour" and "an incredibly powerful album."

Taking its title from its number in their catalogue, "Th1rt3en" was another instant classic in the MEGADETH oeuvre upon its release on November 1, 2011. Darker, heavier and more immediate than its predecessor, the album has become a firm fan favorite and has only further cemented MEGADETH in the halls of heavy metal history as one of the greats. 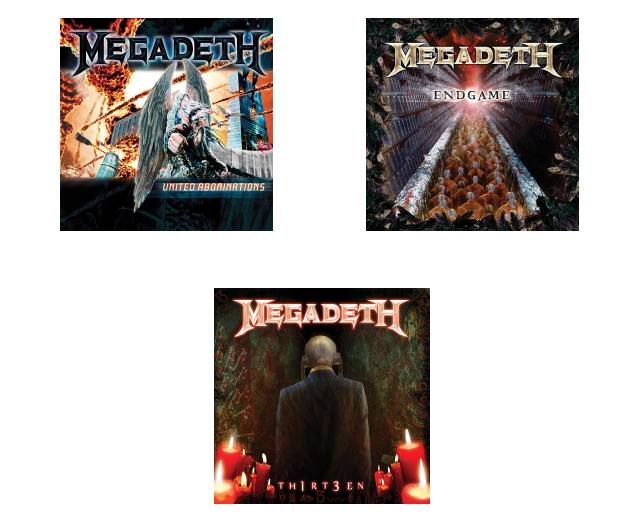