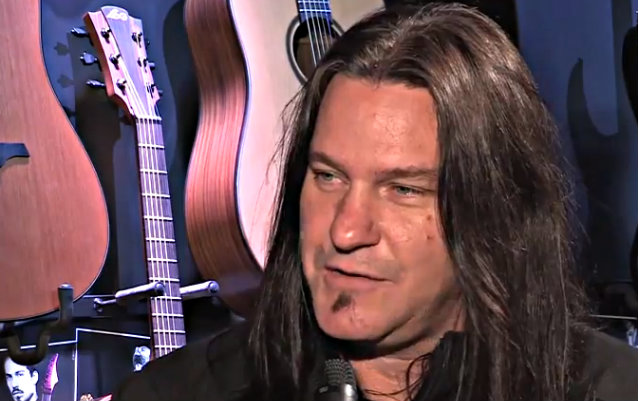 Anthony Toto of Pop-Break.com recently conducted an interview with MEGADETH drummer Shawn Drover. A couple of excerpts from the chat follow below.

Pop-Break: "Super Collider" was released earlier this year. After six months, you had a chance to sink your teeth into these songs and play the material live. For you personally, what was the experience like recording album? You guys worked with [producer] Johnny K. once again?

Shawn Drover: The experience was really good for me recording the album. For me personally, a lot of the drum tracks that went into the record were recorded by our engineer, Cameron Webb, who I get along with very well, and we really have the same kind of vision as to what we want to do with drum sounds, sonically and performance-wise. Between Cameron, myself, and Dave [Mustaine, MEGADETH mainman] in the studio, I had a really great experience. It was real creative and a real blast. I can't say enough how great Cameron was for the record.

Pop-Break: The sound of "Super Collider" seemed to continue in the direction of "TH1RT3EN" by moving away from the faster thrashy elements heard once again on "Endgame". The new songs are more mid-tempo and move towards a more radio friendly direction. What influenced the sound the album?

Shawn Drover: If you listen to all of our records, not two of them sound the same. "Killing Is My Business" doesn't sound like "So Far So Good…So What". "Peace Sells" doesn't sound like "Rust In Peace", so on and so forth. We go into the studio with a bunch of ideas and whatever comes out comes out. "Endgame", obviously, looking back, definitely had more of a thrashy vibe to it in certain parts and it's a full-on metal record. I really love that record a lot. "Super Collider" has more twists and turns to it, which I have no issue with either. For us to do the same thing over and over again, obviously a certain amount of fans always want us to play "Looking Down The Cross", "Devil's Island" and "The Conjuring", brutal stuff like that. When you really think about it, it's never really been like that, because certain songs have those heavy elements, which I love because my favorite thing to do is the heavy stuff. A lot of our albums are not all brutally heavy. If it's a real heavy record, that's great. If it's not so heavy with twists and turns, that's okay too.

Pop-Break: Your band recently celebrated the 20th anniversary of "Countdown To Extinction" by playing it in its entirety. Do you think any of the elements from "Countdown" rubbed off on "Super Collider" or will it possibly influence the new material? I know Dave is already talking about his ideas for the new music.

Shawn Drover: I don't know, because we did the celebration for that record a year ago. Obviously, we played that in a lot of areas. The thing with that, we also did the whole "Rust In Peace" celebration 2010 and that didn't really rub off on the next record. It's cool to go back and revisit, it's a cool thing for the fans to come see, which is great. Honestly, you got to stay in the now. If you go back and try to repeat yourself, you're just a fake and you're trying to replicate something you have already done in the past. It's like VAN HALEN going back and trying to re-record "Van Halen" 1. It's not going to sound entirely like "Atomic Punk"; you just can't do it because you're in a different headspace. It could be aggressive or whatever you want it to be but it's never going to be the same. I just don't think it's good to replicate yourself anyway.

Pop-Break: "Youthanasia" will be celebrating its 20th anniversary next year. I recently read a quote from Dave mentioning the possibility of the band playing the album in its entirety. Where does "Youthansia" rank for you personally amongst MEGADETH's catalog?

Shawn Drover: I honestly don't know if we're doing that next year or not. Yes, I've heard talk about it, but every year is an anniversary of one of our records. Although I love that record, I got to tell you that I love all the records for different reasons. I love "Killing Is My Business" because it's just so aggressive and filled with musical hatred. It's just one of my favorite records. "Youthansia", to me, is such a concise record. All the songs are so polished and put together so well. No, it's not the most brutal record they've ever done. In terms of songwriting, the songs are amazing on that record and the production is flawless. It's a Max Norman production. I just think that record is extremely solid from start to finish. To play that live which we never done, if it does happen, I think it would be great. You always hear or read things on the Internet and you don't know if it's true or not. I don't want to confirm something that I don't know if it's true or not. We'll leave it at that. If it does happen next year and we do play the record anywhere, I think it will be great and we'll just have to wait and see.