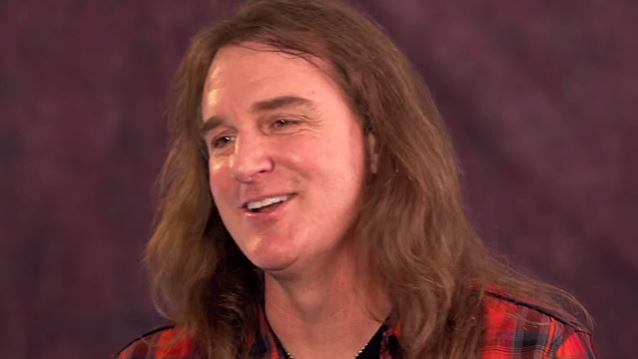 MEGADETH bassist David Ellefson is the latest musician to offer his opinion on U2's recent collaboration with Apple that resulted in the Irish group's new album, "Songs Of Innocence", being placed on every single iTunes account in the world for free regardless of whether it was wanted or not.

Unlike many who felt that the placement of the album was an unwanted intrusion, free or not, Ellefson told JoeDaly.net: "Years ago, everybody wanted to hate on METALLICA and Lars Ulrich because he fought Napster. Well, duh! He was right. Now there's another big artist named Taylor Swift doing the same thing with Spotify. So it's easy to hate people when they're making bold moves that, quite honestly, the rest of us can't make. So it's easy to hate the 800-pound gorilla because everybody sees them as entitled and privileged and they get to do what the rest of us can't. But you know what? They work their asses off for it."

He continued: "I didn't buy the last U2 record; it was given to me by iTunes. [Laughs] I did listen to part of it on the airplane and there are U2-isms on there.

"I saw them when they played on 'The Tonight Show' after Jimmy Fallon took over there was a moment when the Edge picked up an acoustic guitar from behind the couch and started playing 'Stairway To Heaven'. I can tell a guy's musicianship within the first two to three bars of him touching the instrument, whether he's playing the drums or a piano or plucking an acoustic guitar. You can tell the quality of their craft within the first few notes, and U2 have it. They're a phenomenally great band. Whether you like their recent songs or not, whether you like some of the publicity moves they make or their business acumen, I have nothing but tremendous respect for that band."

Of the 500 million iTunes accounts that received the U2 album in September, Apple reported that 33 million of them had accessed the record.

A public outcry from some iTunes users who felt that the stunt was intrusive led Apple to create a button by which customers could remove the album if they wanted. The album was released in October as a standard physical and digital purchase.