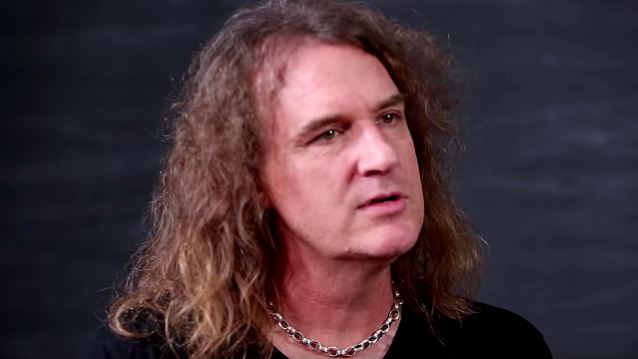 MEGADETH bassist David Ellefson was interviewed on a recent edition of the "Talk Toomey" podcast. You can now listen to the chat using the audio player below.

Speaking about his decision to follow in the footsteps of JUDAS PRIEST, AEROSMITH drummer Joey Kramer and a few other rockers into the coffee business, Ellefson said: "I think most of my fans that I'm a huge coffee drinker, and as I go around the world, I've shot many videos hanging out at coffee places. It's sort of this tireless pursuit of finding the perfect coffee bean. And it's a fun little passion. It's kind of 'Where's Waldo?' Where's David at the coffee place today?' kind of thing. And a friend presented it to me. He just said, 'Hey, I wanna make an introduction to you to Parliament Coffee Roasters,' and out of that was born… It was kind of like the record label. I produced and developed this little female group called DOLL SKIN, and in order to sign it, I had to form an imprint [called EMP Label Group]. And it's kind of what the coffee business is; I basically formed an imprint coffee label to work with a coffee roaster to put coffee out."

He continued: "Life is funny that way, man. These cards come your way, and you wake up one day [going], 'Wow! I never thought I would be overseeing a coffee company, but what the heck? Why not?' So, to me, it's 'just say yes, and just go with the flow.'"

According to Ellefson, he is very involved in developing the blends for his coffee company. He said: "It's cool, because I taste all of 'em, so I personally taste it. And there's a bunch that I passed on. In fact, there were some that I wanted to like, and when I got 'em, I didn't. I'm, like, 'Yeah, that ain't working.' So if I'm gonna put my name on it, I want it to be something that I… First of all, it's gotta be something that I like, and I realize I have a personal taste, and just 'cause I like or don't like it doesn't mean someone else isn't gonna like it. But a bigger part of it is, because coffee generally grows around the equator belt of the earth; that's the climates that are more inclined for coffee growing. So there's kind of a limited number of countries that are gonna be producing coffee."

He added: "For me, as a world traveler and global kind of guy, I wanted it to be something that's very community oriented, that brings people together over a good cup of joe, and to start with a Brazilian blend. And I've got a few other blends that I'm gonna push out here that I'm looking at right now that are things that, again, create community, that fans are excited [about]. You know, like, ''Hey, this is cool. Here's a coffee that David's pushing out that's from my country.' It's kind of like when we do tour books, we put the flags in there to signify all the different countries that we've been to, and I think the coffee thing is sort of that same mindset."

Asked if he ever called up fellow coffee connoisseur Charlie Benante of ANTHRAX, who owns his own "Benante's Blend" coffee line, to ask him for any advice on how to run a coffee company, Ellefson laughed and said: "It's funny. I love that Charlie loves coffee. I mean, look, Charlie's got… he's got basically a Starbucks drum kit. So, me and my buddies, we have like-minded interests. Again, it was really something that just sort of fell in my lap and became fun, so I just said, 'Yeah, let me just sort of put my own lifestyle into the coffee, because coffee's part of my lifestyle.'"

The first offering from the Ellefson Coffee Company, "Roast In Peace", began shipping in early April. The Brazilian Dark Roast sells for $14.99 and is available from EMPMerch.com. Ellefson calls it "perfect for the next time you wake up...dead."

Ellefson is not the first member of MEGADETH to have his own coffee blend. In 2008, MEGADETH mainman Dave Mustaine introduced an organic, micro-roasted, fair-trade cup of joe that bore his name, in Peruvian, Black Gold, and decaf blends distributed by his wife's Net Worth Coffee Brokers company. Mustaine discontinued the line in 2009 for undiscosed reasons. 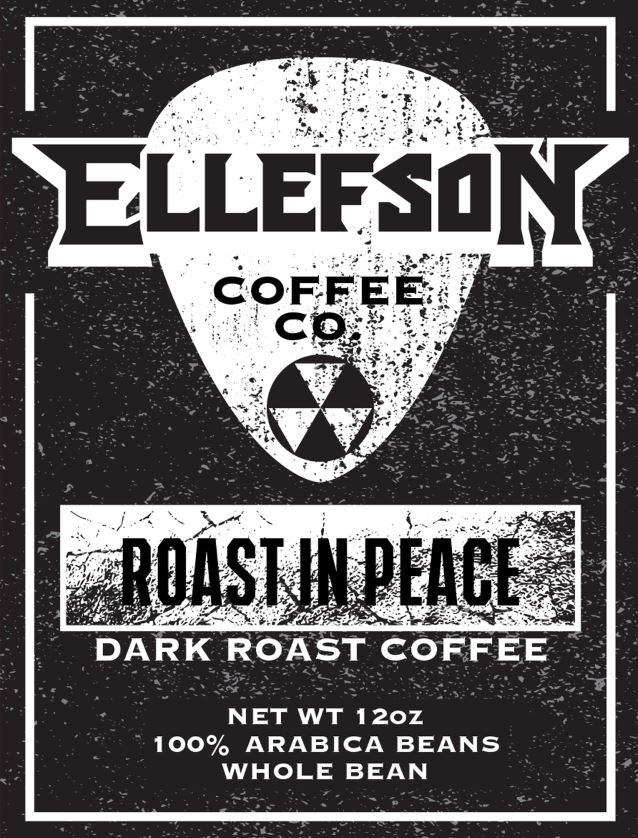