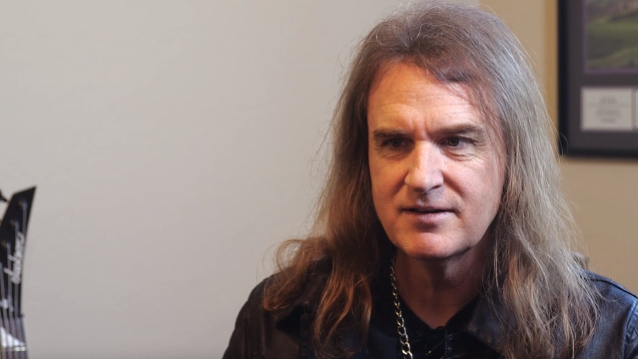 MEGADETH was honored with its first-ever Grammy nearly two years ago. The band received the "Best Metal Performance" award for the title track of its latest album, "Dystopia". This marked the group's twelfth Grammy nomination in this category (including nominations in the discontinued "Best Hard Rock/Metal Performance" category).

Speaking to the Recording Academy, MEGADETH bassist David Ellefson said that he and his bandmates didn't expect to finally get the trophy after so many years of going home empty-handed.

"We've never written songs to win Grammys, or any awards, quite honestly," he said (see video below). "We just write songs. And it seems like if we like 'em, our fans like 'em and it just sort of tentacles out and it grows from there.

"I think with 'Dystopia', there was this moment where it was kind of, like, 'If they don't like this, we're out of ideas,'" he continued. "Because every record you make, you're essentially creating your next future. And I don't care who you are and how great of a record you feel you've made, when you first put it on for somebody to hear it, there's always this moment of, 'Oh, God. I hope they like this.' We certainly have had that with every album, and I think with 'Dystopia', we held our heads high and went, 'I think we've got a good one here.' And it seems to have done the trick to get us to the winners' circle."

The Grammys are voted on by approximately 13,000 Recording Academy members, who are comprised of artists, songwriters, producers and engineers. More than 21,700 recordings were submitted for Grammys consideration in 2017.

MEGADETH is currently working on the follow-up to "Dystopia" for a late 2019 release.

The band will support OZZY OSBOURNE on the next North American leg of the BLACK SABBATH singer's "No More Tours 2" in May, June and July 2019.