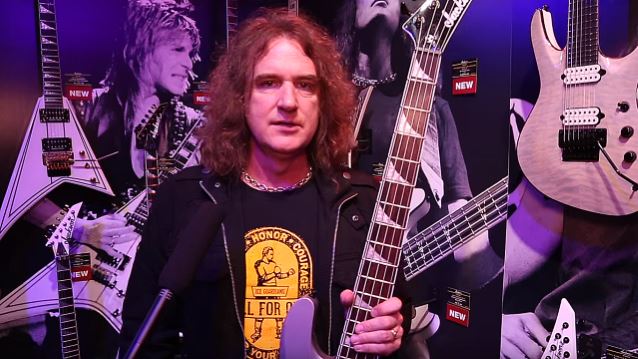 MEGADETH's David Ellefson has four new Jackson signature bass models in 2016 to add to the arsenal for his upcoming tour for the band's fifteenth studio album, "Dystopia".

Ellefson has reigned as a thrash bass godfather, garnering worldwide acclaim as a co-founding member of "Big Four" thrash innovator MEGADETH and widely known for his fleet-fingered, hard-hitting style and versatility. Simply put, nobody shreds a bass like Ellefson, and Jackson is proud to have his name on several new formidable bass models.

The CBX IV offers a basswood body, 12"-16" compound radius rosewood fingerboard and a Jackson HiMass 4-string bridge to sharpen notes’ attack for extra punch and clarity, granting enhanced sustain without significantly altering the instrument’s fundamental tone. An earth-shaking pair of EMG HZ35 active humbucking pickups in the neck and bridge positions provide plenty of girth and cut as an active 3-band EQ bolsters their native power, shaping and refining it for maximum impact and versatility. The blend knob allows for mixing the pickups to taste — add more of the neck pickup for a touch of warmth, or bring up the bridge pickup for more cut.

The CBX V also features a basswood body, a Jackson HiMass 5-string bridge and a pair of EMG HZ40 active humbucking pickups in the neck and bridge positions that provide plenty of girth and cut as an active 3-band EQ bolsters their native power, shaping and refining it for maximum impact and versatility. Similar to the CBX IV, the 5-string model also features a 12"-16" compound radius rosewood fingerboard and a blend knob.