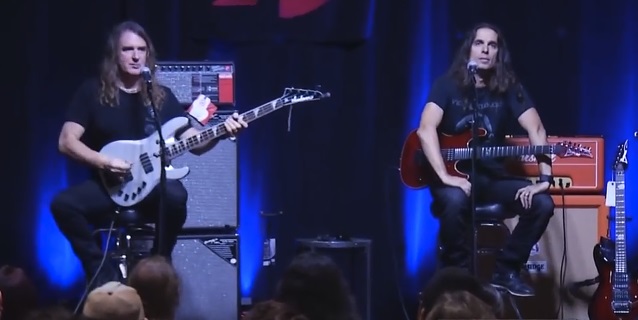 David Ellefson and Kiko Louriero of MEGADETH took part in a question-and-answer session and performance on October 15 at the Replay Guitar Exchange in Tampa, Florida. Video footage of their appearance can be seen below.

Ellefson recently confirmed to "The Right To Rock" podcast that MEGADETH has begun putting together material for the follow-up to 2016's "Dystopia" album. "We're actually working on a new record," he said. "Working on it, meaning we're [collecting] ideas and we've been writing some lyrics — just starting to move that next process forward. And now that we're gonna come off the road — we go down to South America and play four shows [in early November] as kind of a final, last big swing down there to see our fans in Chile, Argentina and Brazil. And then we're gonna shut things down through the end of the year and into the New Year for a bit. And there's already some things that are being discussed for some performances next year, in 2018. But a big part of that is also going to be writing a new record."

MEGADETH's upcoming effort will mark the band's first release to feature drummer Dirk Verbeuren, who officially joined the group a year and a half ago.

"Dystopia" was MEGADETH's first album with guitarist Kiko Loureiro, best known for his work with ANGRA.

Ellefson told "The Right To Rock": "'Dystopia' has been out two years and we worked on it through all of 2015, and we were even writing it in 2014. So 'Dystopia', parts of this record are already four years old. So just from a creative standpoint, it's fun to be able to now start thinking about writing some music, and especially writing together with this lineup in mind. Songs aren't always written collaboratively, together, with the four of us, but when they're written, it's nice to know, like, 'Hey, we're writing it with this lineup in mind.' And what Dirk can do, what Kiko can do and what I can do, and putting it together with that in mind."

MEGADETH picked up its first-ever Grammy for "Best Metal Performance" this past February. It was the tenth time the band had been nominated in its 34-year career.

MEGADETH leader Dave Mustaine told the Windsor Star in June that he was "pretty happy" with the response to "Dystopia". "When you set out to do a record, you obviously hope for the best," he said. "The peculiar thing about it is we didn't do anything different this time from the last time. It's just a matter of who you're playing with and song selection." 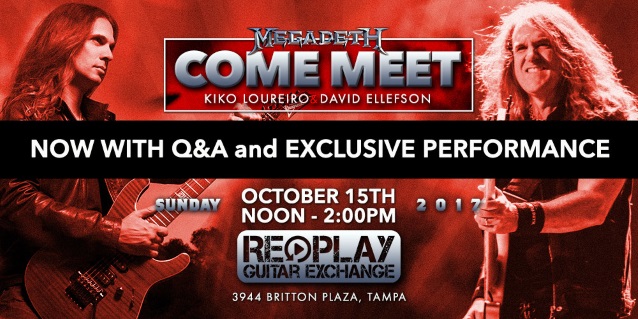