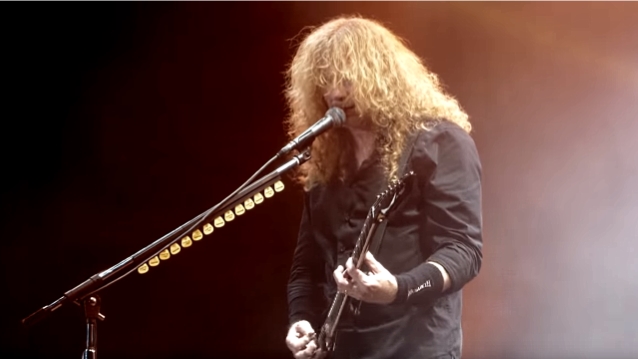 Reverb.com, a leading web site and app dedicated to buying and selling new and used musical instruments, announced that it has partnered with MEGADETH frontman Dave Mustaine to sell music gear used live and in the studio throughout his storied career. The official Dave Mustaine Reverb shop will launch on Monday, November 4, and will feature nearly 150 items, including guitars, amps, drum gear, pro audio equipment, and more used by the thrash metal legend.

"When you've been playing and touring for as long as I have, you tend to amass quite a collection of gear. They're great instruments and they represent more than 40 years of playing, but I've got more than I could possibly use myself," said Mustaine, who joined METALLICA as lead guitarist in 1981 before eventually founding MEGADETH. "I owe so much to my fans. If it wasn't for them, I wouldn't even have all this gear. I'd rather give it back to them than let it sit and collect dust."

* Several Marshall EL34 100/100 Dual Monoblock amps, including one that is autographed and one that still has the guitarist's settings marked.

* An Akai MPC1000 drum machine that was used extensively on tour and autographed by Mustaine.

* Several Zoom G2.1DM Dave Mustaine Signature pedals used by Mustaine on tour as indicated by the gaff tape still on the pedals.

* Multiple Fractal Axe FX-11 amps used by Mustaine both on tour and in the studio.

* A seven-piece DDrum drum kit with the cover art from "Peace Sells" on the kick drum.

Mustaine joins a growing number of artists — including GREEN DAY, MASTODON's Brent Hinds and AVENGED SEVENFOLD — who've partnered with Reverb to get musical instruments and gear from their personal collections into the hands of fans.

To preview the items that will be available in the official Dave Mustaine Reverb shop on November 4 and to sign up to be notified when the shop goes live, go to this location.

Says Mustaine: "I have a lot, a lot, a lot of gear. I've got a lot of double-neck guitars, I've got a lot of prototype stuff. I've got absolutely killer collector's item stuff for the right guy. For me, my job is to put everything I can into this guitar so that when it gets put into somebody else's hands, I can say, 'This is the guitar that wrote 'Holy Wars'.'

"I have always believed when it comes down to memorabilia with a band —especially instruments — I want to pass this on to people. I want them to be able to have something that I had. I believe a lot in energy... whatever energy I put into this, my particular mojo, I like to be able to give that to somebody."