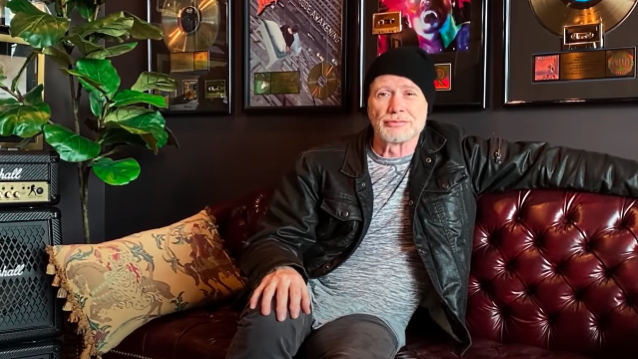 On Wednesday (September 9), MEGADETH's Dave Mustaine participated in his first, highly successful online live signing and discussion with Premiere Collectibles to promote his new book, "Rust In Peace: The Inside Story Of The Megadeth Masterpiece". Released on September 8 via Hachette Books, it details the making of MEGADETH's iconic record "Rust In Peace".

Asked for an update on his health, 16 months after he was diagnosed with throat cancer, Mustaine said (see video below): "I have a good bill of health. And you know me — when I do things, I have to do it all the way. So in the process of doing all of the testing, they found a bunch of other little spots where it showed up on my skin. So they took care of all of that. And I'm in the studio working. I'm a little bit tired, a little fatigued from all of the chemo and 52 doses of radiation, which is a lot. But I'd get into the studio and I'd start hearing that music and it'd start seeping into my soul, and nothing matters anymore. I can fly."

Mustaine was told he was cancer-free last October, five months after receiving his throat cancer diagnosis.

The 58-year-old MEGADETH guitarist/vocalist revealed his cancer battle in June 2019 on social media, saying the doctors had given him a 90 percent chance of beating the illness.

Mustaine addressed his cancer battle during MEGADETH's concert in January at The SSE Arena in London, England. Speaking to the crowd before launching into the title track of MEGADETH's latest album, "Dystopia", he said: "About a year ago, we were working on our new album back in Franklin, Tennessee, and I started to feel some pain over here [points to his throat]. So I went to the doctor and he said, 'Dave, you have cancer.' And I went, 'Fuck! I have cancer.' And I was so shocked."

He continued: "At first, I thought, 'Am I afraid?' And then I said, 'No. I'm fucking pissed.' And we stopped the record; we stopped everything. I went into treatment for cancer. It was 51 radiation treatments and nine chemo treatments. And when it was all said and done, every day I would think, 'I can't face not playing again. I can't face not playing again.' So I would pray. I know a lot of you guys know that I pray. I say that in [the MEGADETH song] 'Peace Sells'. I pray every day. I say that in the song. I've said it since the second record. But I thought about you guys every day too. And I thought about my family. And I got this power from you guys. And I just kept thinking about it. And on October 16th, I went to go see the doctor, and he said, 'You're 100 percent free of cancer.'"