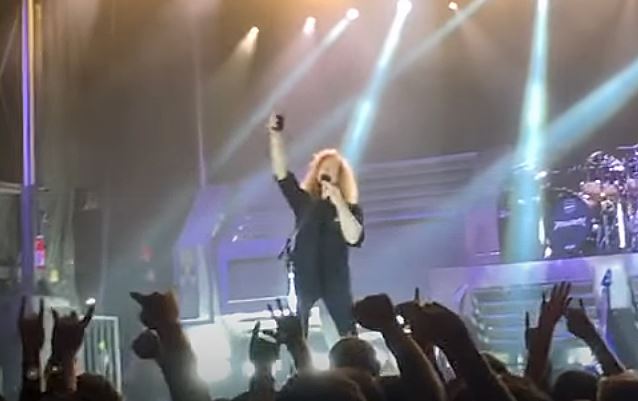 Tigman of the Q103 radio station conducted an interview with MEGADETH mainman Dave Mustaine at the inaugural Rock'N Derby festival, which was held May 20-22 at the Schaghticoke Fairgrounds in Schaghticoke, New York. You can now watch the chat below.

Speaking about the passing of MEGADETH's former drummer Nick Menza, Dave said: "Contrary to popular belief, Nick and I were very, very close. I think when you're that close with somebody, the temperatures run a lot hotter than in most relationships, so the love is that much more deeper and the anger is so much more hot and the sadness is so much more profound. So I think that's when you know that you're really in a relationship with somebody that matters to you."

He continued: "Nick was a very talented musician, and he came from a talented family. His dad played the saxophone on the 'Pink Panther' song. Yeah, his dad was the original saxophone player for Henry Mancini in 'The Pink Panther'.

"So Nick and I were really, really close. And people think that we had this failed reunion attempt. There were several times that we tried to reconcile stuff, and it just didn't happen for whatever reason — I don't know why, but it didn't."

Mustaine added: "I think now, it's the time for everyone to remember Nick and his legacy of just great performances. And tonight we are hoping to do a moment of silence, and the band's already agreed, we're gonna do a benefit in California to… I mean, we're working out the details; you're the first person to hear this. So we're working on a benefit there. And we're hoping to leave an open stage for all of the alumni from MEGADETH to come there and play with us, so that we can help leave behind something for Nick's children, which, I think, had been kind of left in a bad way. We wanted to get all that stuff set up and right now, that's what… the wheels are all turning in our camp.

"So, to anybody that thinks that I don't love Nick [raises middle finger]… You can imagine what I just said."

During MEGADETH's performance at the Rock'N Derby Sunday night, Mustaine asked for a moment of silence in tribute to Menza and closed the band's show by paying an onstage tribute to the fallen drummer. He told the crowd (see video below): "I usually say 'You've been great. We've been MEGADETH.' But Nick, you've been great," Mustaine said while pointing to the sky. "I love you, buddy."

Menza passed away Saturday night (May 21) while performing with the band OHM: at The Baked Potato in Studio City, California. He was 51 years old.

Nick collapsed during the third song of OHM:'s set. Early reports indicate he suffered a massive heart attack and was pronounced dead upon arrival at hospital. No other details are being released at this time.