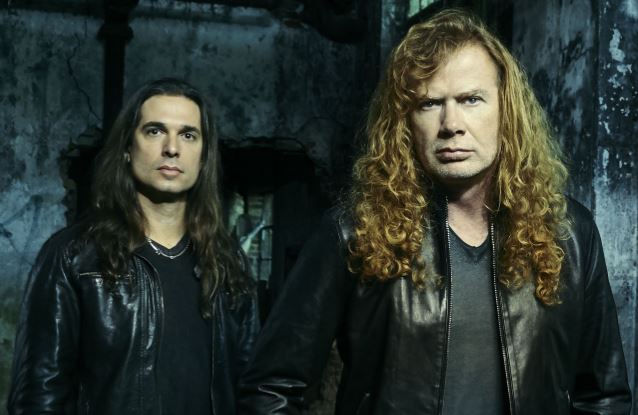 In a recent interview with Full Metal Jackie, MEGADETH leader Dave Mustaine spoke about his relationship with the band's latest addition, Brazilian guitarist Kiko Loureiro, best known for his work with ANGRA. He said (hear audio below): "Well, I think when you get around somebody that's great, you have a few choices. You can either roll up into a ball and just die, or you can see what you can learn, or you can say, 'You know what? I'm as good as you are.' And I'm good at what I do, Kiko's good at what he does."

He continued: "It was super exciting to be in [Kiko's] presence and to learn a lot of the stuff that he does. I showed him some stuff, he showed me some stuff. But I've gotta tell you, probably the most rewarding feeling out of all this is having a partner again. Because for a long time, it hasn't really felt like there was a partnership."

Mustaine went on to say: "When the Drovers were together, Shawn [Drover, former MEGADETH drummer] and Glen [Drover, former MEGADETH guitarist] were brothers, so they had that blood thing, where they hung out together a lot. And the guitar player that we've had outside of the relationship I had with [Chris] Poland in the beginning, which was totally drug-oriented, and with Marty [Friedman, former MEGADETH guitarist] with the 'Rust In Peace' years, I haven't really had that friendship with a guitar player for a very long time, which, I think, probably is the best thing out of this. Because when you look over somebody on stage and you're laughing and you're having a good time, that means a lot versus when you look over at somebody on stage and you're thinking, 'You know what? I just don't like you.' And I've never really had that overwhelming feeling where I've looked at anybody while I'm playing and thought that. I'm sure back during the day with Chris [Poland] and Gar [Samuelson, former MEGADETH drummer], when we were trying to kill each other, I probably felt like that. But, you know, it's great to be able to look over and see Chris [Adler, current MEGADETH drummer] and Junior [MEGADETH bassist David Ellefson] and Kiko and just be happy."

Kiko recently told Music Radar that he picked up a lot of new things while jamming with Mustaine. "He has such an interesting and unique style of playing," Loureiro said. "I was kind of not sure I could really play it the same way. He showed me many guitar tricks. Because he is self-taught, the way he plays is different to everybody else. I got to learn how to really play the thrash metal riffs from the source. Y'know, Mustaine. It was a great experience. Although I was intimidated in a way, I knew it would be a very good learning moment for me, to really learn from Mustaine, who created this style, who created this way of playing thrash metal riffs."

Kiko also said that a time eventually came during the songwriting process for MEGADETH's new album, "Dystopia", where he felt comfortable offering his input.

"If an idea doesn't work for a song or doesn't work for the concept, that's all good, let's bring another one," Kiko said. "And that's the way you can be creative and help through the whole process of creating an album. I had to understand what was cool, what was not, what belongs in MEGADETH. If you know the concept, where to go, it's easier to record a solo. You just go in there and improvise and something cool is going to happen."