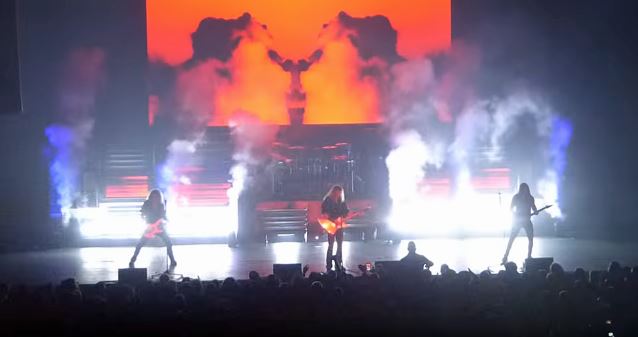 Fan-filmed video footage of MEGADETH's March 19 performance at the Sands Bethlehem Event Center in Bethlehem, Pennsylvania can be seen below.

"Dystopia" debuted at No. 3 on The Billboard 200 chart, No. 1 album on the Hard Music and Top Rock charts. and No. 2 on the Top Album Sales chart. Globally, "Dystopia" also achieved Top 10 debuts in Canada (No. 2), Japan (No. 2 international chart), Finland (No. 3), Mexico (No. 4), Czech Republic (No. 5), Australia (No. 6), New Zealand (No. 6), Switzerland (No. 7), Poland (No. 8) and Germany (No. 10), which along with Belgium, Ireland and Spain contributed to achieve MEGADETH's highest ever chart positions in their thirty-year history in a total of ten countries around the world. Other countries with significant sales or chart debuts included U.K., Norway, Sweden, Italy, Netherlands, and France.