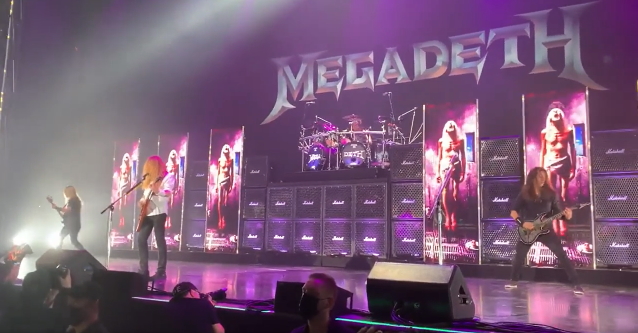 MEGADETH played its second show with bassist James LoMenzo in nearly 12 years last night (Saturday, August 21) in Irving, Texas. As was the case the night before in Austin, "The Metal Tour Of The Year" concert at the The Pavilion at Toyota Music Factory saw MEGADETH share the stage with co-headliners LAMB OF GOD, along with TRIVIUM and HATEBREED.

MEGADETH's 12-song show in Irving did not include "The Threat Is Real", "Sweating Bullets" and "Mechanix", all of which were performed in Austin, but did see the Dave Mustaine-fronted outfit add "Take No Prisoners", "The Conjuring", "She-Wolf" and "A Tout Le Monde" to the setlist.

Produced by Live Nation, the rescheduled trek will hit a further 26 cities before wrapping in Quebec City, Quebec, Canada on Saturday, October 2.