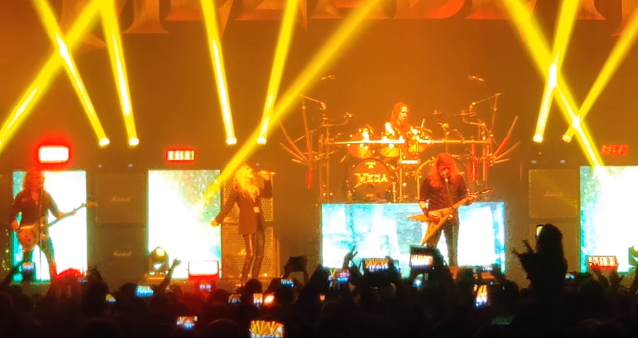 Electra Mustaine, the 21-year-old daughter of MEGADETH frontman Dave Mustaine, joined the band on stage earlier tonight (Tuesday, January 28) Le Zénith in Paris, France to sing a duet with her father on the classic MEGADETH song "À Tout Le Monde". Fan-filmed video footage of her appearance can be seen below.

Back in 2013, then-15-year-old Electra, who is an aspiring singer, performed her version of "À Tout Le Monde" with Jason Kertson, the grandson of Rob Lind, a member of THE SONICS, at several live appearances, including on King 5's "New Day" TV show. Three years later, she recorded a cover of another MEGADETH track, "I Thought I Knew It All", which originally appeared on the band's 1994 album "Youthanasia".

"Being on stage is so addicting," Electra said in a 2016 interview. "It's a high that you can't shake.

"Music is in my blood," she added. "I just interpret it much differently [from the way my father does]."

Electra told Rolling Stone Country that she wanted to cover "I Thought I Knew It All" because she felt "it'd be a great tribute to MEGADETH fans for all the years of support. I wanted to say thank you, because, honestly, if it weren't for MEGADETH fans, I wouldn't be able to try to fulfill my dreams now," she explained. "I thought, let's show everyone this is where I come from, and yes, I am Dave Mustaine's daughter, but look what I can do with it. We tried to make it organic, raw and vocally driven."

MEGADETH is currently on the road in Europe as the support act for FIVE FINGER DEATH PUNCH. The trek kicked off on January 20 in Helsinki, Finland and will conclude on February 22 in Sofia, Bulgaria. The Helsinki concert was MEGADETH's first since Dave Mustaine was diagnosed with throat cancer and its first live appearance in 15 months.