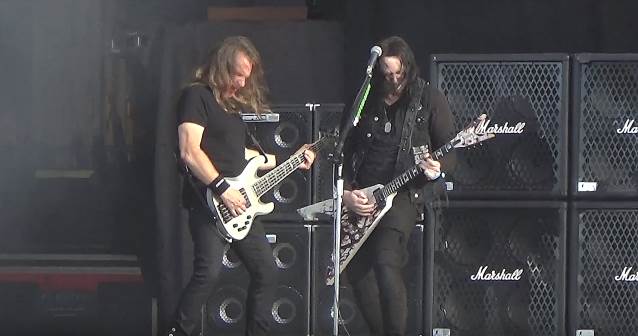 ARCH ENEMY guitarist Michael Amott joined MEGADETH on stage on June 24 at Hellfest in Clisson, France to perform the song "Symphony Of Destruction". Check out fan-filmed video footage below.

The next day, Amott wrote on Instagram: "Thank you, Dave Mustaine and MEGADETH, for inviting me to play 'Symphony Of Destruction' with them on stage at Hellfest, France yesterday. Unreal to share the stage with one of my biggest inspirations in music. Very grateful!"

ARCH ENEMY will embark on the "Will To Power" U.S tour this fall. Support on the trek will come from GOATWHORE and UNCURED. The 22-city tour kicks off on September 28 in Providence, Rhode Island, hitting major markets along the way, before culminating at the iconic Starland Ballroom in New Jersey on October 27.

Thank you Dave Mustaine & Megadeth for inviting me to play “Symphony of Destruction” with them on stage at Hellfest, France yesterday. Unreal to share the stage with one of my biggest inspirations in music. Very grateful! ?? #davemustaine #megadeth #michaelamott #archenemy #hellfest #surprise #megafan