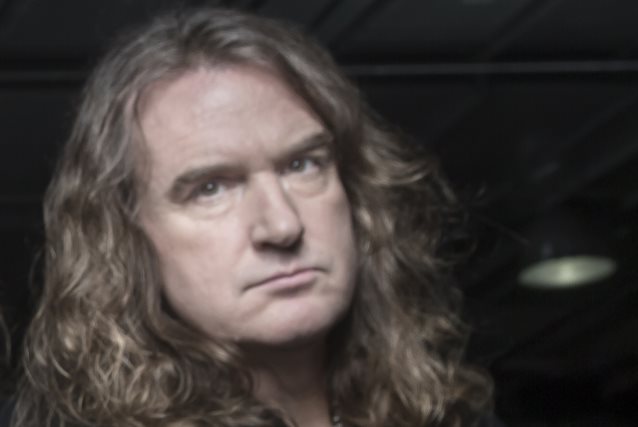 SpazioRock recently conducted an interview with MEGADETH bassist David Ellefson. You can now watch the chat below.

Asked if MEGADETH has commenced work on the follow-up to 2016's "Dystopia" album, Ellefson said: "We have. We're starting to just compile… The process usually goes, we compile riffs, we compile some lyrics, you kind of start putting it together, we start thinking. We've been talking on the bus at night about the process and the location and just kind of how we're gonna do the next album. So a lot of that. So it's nice that we're already thinking forward toward that. We're gonna wrap up the tour in November, and then our intention now is to go in and start working on the record afer that."

Ellefson also talked about the benefits that crowdfunding offers to younger and more established bands when it's time to make a new record. He said: "We have another album with Universal, so we are fortunate that we still have Universal Music Group, a very large major label, to support us on this next record, which is great.

"I do believe crowdfunding is a way of not only the future but of the now for a lot of bands," he continued. "I think there's a lot of groups that, especially if they have some popularity, crowdfunding… it's kind of a way for fans to say, 'Hey, I don't want you to go away, just 'cause you don't have a record deal.' And it's funny: records… It's important to create new music, but the sale of that record isn't as important anymore as it used to be. I mean, it used to be everything — if that thing sold, you'd get to go do all these tours.

"MEGADETH are, fortunately, in this position now where we have such a wide catalog of music, and we have a lot of young fans," Ellefson added. "I really see it more in Europe and South America and Asia and throughout Russia — really, really young fans, young guys, young girls. And it's kind of like the 1980s all over again, and it's great to see. In America, it's tough — it's not as easy over there, because there's a lot of other things: there's Facebook, tech giants and gamers and sports celebrities and Kardashians.

"People in America seek celebrity without substance, and that is not such a popular thing in other parts of the world where money is harder to come by. There are politics, the government, and those things have really… People struggle with those things much more, and that is really… that's the core of heavy metal."

MEGADETH recently completed a North American tour with MESHUGGAH and will play arenas later in the month as the support act for German hard rock veterans SCORPIONS.

MEGADETH's upcoming effort will mark the band's first release to feature new drummer Dirk Verbeuren, who officially joined the group more than a year ago.

"Dystopia" was the first MEGADETH album to feature guitarist Kiko Loureiro, best known for his work with ANGRA.