MEGADETH has invited Indonesian president Joko "Jokowi" Widodo to attend its upcoming concert at the JogjaROCKarta festival in Yogyakarta on October 27.

"We are hoping Indonesian President Joko Widodo @jokowi and Governor Ganjar Pranowo @ganjarpranowo will accept our invitation to see us perform in Jogjakarta on Oct. 27. We can't wait to play @jogjaROCKarta and meet you both there," the band tweeted on Tuesday (September 18).

According to The Jakarta Post, Central Java Governor Ganjar Pranowo replied to the tweet in Javanese: "Thank you so much, bro @Megadeth, by God's willing I will see the show."

MEGADETH mainman Dave Mustaine previously tweeted an invitation to Jokowi in April 2017, asking the president, who was abroad at the time, to watch the band's performance at last year's edition of the Hammersonic festival.

"I'm hoping Indo PM Joko Widodo @jokowi will be back in time," Mustaine wrote. "I'd love to invite him to our show. He's a metal fan, and I think that's cool!"

The 57-year-old Widodo, who served as governor of Jakarta before being elected president in 2014, attended METALLICA's August 2013 concert in the city — 25 years to the day after the release of the band's fourth album, "…And Justice For All", and more than 20 years after their tumultuous first show in Indonesia.

Widodo has professed love for heavy metal bands like METALLICA, MEGADETH, LAMB OF GOD and NAPALM DEATH in the past.

We are hoping Indonesian President, Joko Widodo @jokowi and Governor, Ganjar Pranowo @ganjarpranowo will accept our invitation to see us perform in Jogjakarta on Oct 27. We can't wait to play @jogjaROCKarta and meet you both there.

I'm hoping Indo PM Joko Widodo @jokowi will be back in time. I'd love to invite him to our show. He's a metal fan, and I think that's cool! 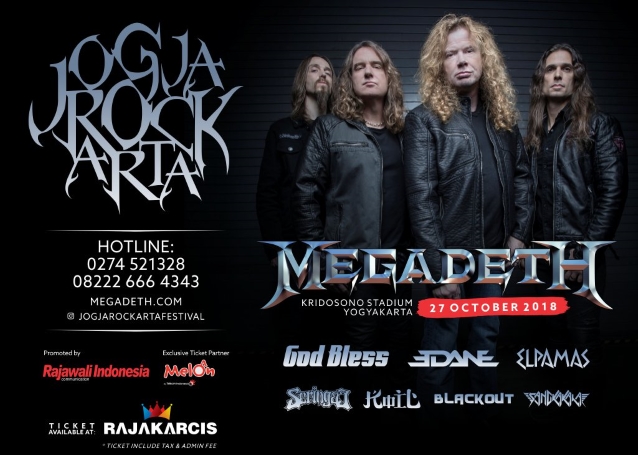