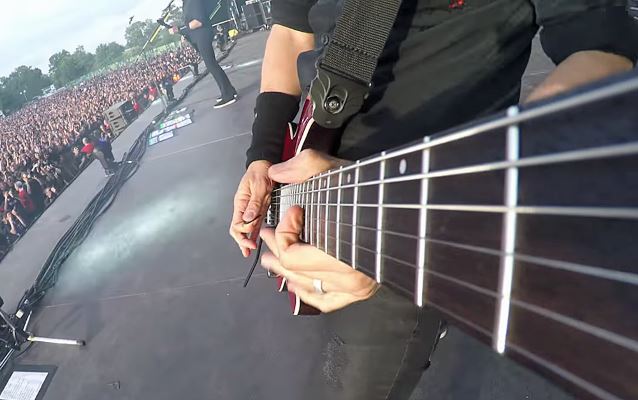 On June 19, MEGADETH played at Hellfest, one of the biggest summer festivals in Europe, held in Clisson, France.

MEGADETH guitarist Kiko Loureiro decided to record and show his fans a little bit of this journey and how everything happens behind the scenes, including the band's travel, press interviews, warmups, the bandmembers' relationships with each other and with other groups at the festival, the concert itself and much more.

Check out the 21-minute clip below.

In a recent interview with HardrockHaven.net, Loureiro spoke about his contributions to the songwriting process during the tail end of the sessions for MEGADETH's latest album, "Dystopia". He said: "That's something that you … you build trust. It's all about building trust. So I think, if you look, that I have three songs that I have collaborated on the album, which is very difficult, because I just came to the band. So two of the guys have known each other for thirty years and I know them for two weeks and I can put my ideas there? So I think I was building trust and I'm still doing that, so, now one year after, maybe they can ask my opinions on stuff so I can help. It's like what I was telling you about being a band member for so many years and trying to decide what is MEGADETH. What MEGADETH needs. Not what Dave [Mustaine], or David [Ellefson], or whatever needs…what the band needs. And then trying to help and then you get your space. Of course, it's very different than Dave or David because they know the band. They've been through everything, you know. It's different. Also, not being a member for such a long time, maybe gives me a different perspective of things. So it can be good as well."

Asked if he was nervous having to follow in the footsteps of Chris Poland, Marty Friedman and other great former MEGADETH guitarists, Kiko said: "Yeah, it's a tough job. At the same time, it's a tough job, but I have the feeling that I'm able to do it. Technically, as a guitar player, I'm able to do it. Also, I've been playing with ANGRA for, like, twenty years, so I have all that experience as a band member. Actually, I think that's my best input for MEGADETH … to be a band member for many years, not a sideman. I was never a sideman. I've played with many bands. So I was always working for a band, like a brand … something with passion, so that's what I'm bringing to MEGADETH besides my guitar playing … a band member. Dedicated, bringing ideas … doing whatever is necessary for the brand, for the logo, for MEGADETH."