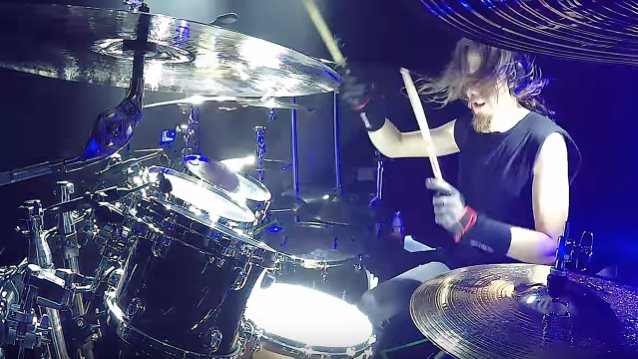 Sick Drummer Magazine has uploaded drum-cam footage of MEGADETH drummer Dirk Verbeuren playing the song "Wake Up Dead" from the band's classic 1986 album "Peace Sells… But Who's Buying?" Check out the clip below.

Verbeuren, formerly of Swedish metal band SOILWORK, made his live debut with MEGADETH at the Rock On The Range festival in May 2016.

LAMB OF GOD drummer Chris Adler laid down all the drums on MEGADETH's latest album, "Dystopia", and toured with the latter band for several months when not otherwise busy with his own group.

The 42-year-old Belgian-born-and-now-Los-Angeles-based Verbeuren had been playing with SOILWORK for more than a decade before being recommended for the MEGADETH gig by Adler, who called Dirk "probably [one of the] top three drummers in the world."

Verbeuren told All About The Rock about learning MEGADETH's material for a live performance: "The current live set is based on 'Dystopia' and the early albums, from Gar Samuelson to Nick Menza. These guys really had their own style. Nick was actually one of my influences as a young drummer.

"I had ten days to study eighteen songs. I tried to capture the intention behind the drum parts in order to respect the band's vision. Gar and Nick have a more old-school swing whereas Chris Adler's approach is more contemporary. I stay true to the originals while injecting some of my own groove and flair. Chris was very helpful in guiding me as to what the band would expect from me, which is super cool of him. It made the rehearsal and first shows a lot easier."