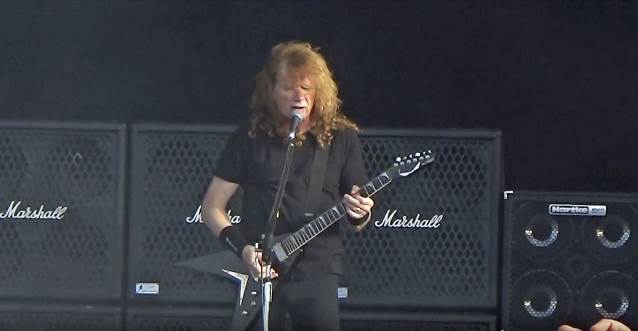 MEGADETH dedicated the song "My Last Words" to Vinnie Paul Abbott during the band's June 24 performance at Hellfest in Clisson, France.

Prior to launching into the track, frontman Dave Mustaine told the crowd: "This next song we're gonna do for you, we played it last night for the first time in almost 20 years; we haven't played this song for a very long time. And we played this and we dedicated it to a friend of mine — all of ours — who passed away. This song is dedicated to you, Vinnie. This song is called 'My Last Words'."

In a 2013 interview with the Dallas radio station 97.1 The Eagle, Vinnie confirmed that he and his brother, PANTERA guitarist "Dimebag" Darrell Abbott, once came close to joining MEGADETH. "Yeah, man," he said. "It was right before we ever got our record deal. It's a true story. [Mustaine] called and told Dime, 'Man, look, I'm gonna hook you up with a Nike endorsement, I'm gonna give you a paycheck, and you're gonna play guitar in MEGADETH.' And, of course, at that time, PANTERA had been struggling, playing all the clubs around Dallas, Oklahoma, [and other cities in] Texas, all those different places, and we'd been doing it for about seven years. And Dime straight-up just told Dave, he goes, 'Look, if you want me to play guitar for you, my brother's gotta come with me. That's the deal. That's the way it works.' And Dave's, like, 'Man, we've already got a drummer.' And Dime was, like, 'Well, sorry, dude. I'm not playing for your band.' And he stuck with PANTERA and everything worked out."