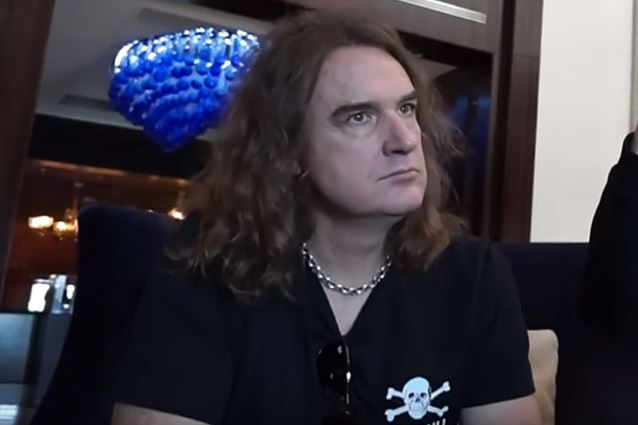 Regarding how the session came about, Ellefson said: "Dave [Mustaine, MEGADETH leader] sent me a message, a text [Tuesday] morning, and said, 'Do you wanna join me and Kiko [Loureiro, MEGADETH guitarist] in thirty minutes do some acoustic on the lawn?' And I didn't have a bass, and Dirk [Verbeuren, MEGADETH drummer], of course, didn't have drums, so it was very fun, very spur of the moment, very impromptu."

Asked if the members of MEGADETH enjoy taking part in these unusual fan interactions, Ellefson said: "It's better than an autograph [laughs] and better than a photo, 'cause the songs are what brings us all together, and to be able to sit there close and personal like that, and to get some sunshine on us after being in the dark. So it's fun, it's very spur of the moment. So it's not something that's planned, and I think that's what certainly the people of Argentina love these spontaneous moments from us."

MEGADETH fall 2016 North American leg of the "Dystopia" world tour will kick off in Casper, Wyoming on September 20 and take them across the U.S., visiting 16 states with special guests AMON AMARTH, SUICIDAL TENDENCIES and METAL CHURCH.

MEGADETH recently announced the addition of Verbeuren as the band's new drummer. Verbeuren, formerly of Swedish metal band SOILWORK, has been performing with the band for months; his first show was Rock On The Range festival in May, to a crowd of 40,000 concertgoers.