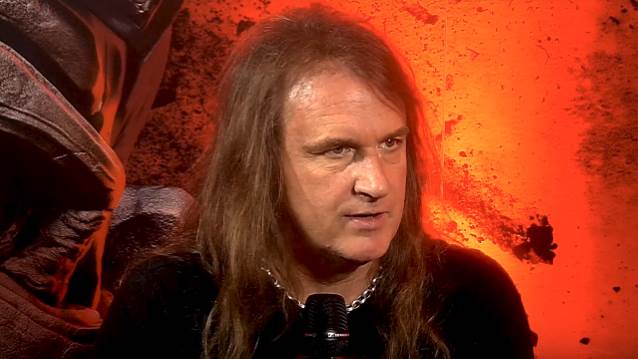 MEGADETH bassist David Ellefson and drummer Dirk Verbeuren were interviewed at this year's Graspop Metal Meeting, which was held June 21-24 in Dessel, Belgium. You can now watch the chat below.

Asked if MEGADETH is the kind of band that pays attention to the number of streams its music gets on Spotify, Ellefson said: "Well, fortunately, the way that we get paid off of those digital streams is changing. It's interesting now that we're part of the Grammys. The Grammys have a big initiative on Capitol Hill in Washington, D.C. to change those laws. In America, those laws haven't been updated since the '70s, so they can almost just discount what they pay us. And that's gonna change very quickly, which is awesome, because it starts to set a precedent around the world.

"As great as the digital streaming is as a promotional thing, it's extremely unfair to us," he continued. "They've built entire massive fortunes on the backs of our music that we don't get paid for. And that, fortunately, is gonna change. And thank God for the Grammys. It's kind of good to be a in a cool club with them, because they have the muscle to do it. So that's great.

"Now, as far as the fans, the user? My daughter, my kids, I don't think they hardly bought any music — they always get everything… My daughter, for sure, gets things off Spotify, so I pay attention. And certainly YouTube and all that stuff, so, of course, it's important. Because if we're not on our drums and guitars, we're probably on our phones. So it's important that we pay attention to it, because our fans are a part of it. So if we wanna connect to our fans, we need to be there.

"Thank goodness, again, like I said, the middle is getting connected better as far as the fairness of the royalty and everything, which, of course, makes us feel better, because we feel like we're being compensated for a lot of hard work," he added. "And somebody had to pay to make those records, so it's nice that everybody now starts to get a fair take on that."

Ellefson also talked about MEGADETH finally winning a Grammy Award in 2017 for "Best Metal Performance" for the title track of the band's latest album, "Dystopia". This marked the band's 12th Grammy nomination in this category (including nominations in the discontinued "Best Hard Rock/Metal Performance" category).

"That's like the call-home-to-mom moment," Ellefson said. 'The Grammy is, I think, for us — it's huge. And I was just actually at the Grammy office about a month ago, and even they're excited; I mean, they're, like, 'Wow! Thank God you guys won.' And we've been nominated 12 times, and we've got fans inside there. Some metal bands, I think, you can win a Grammy, and I don't know how big of an effect it has, because metal fans are gonna love us no matter what, and that's why we love our fans. But I think this win for MEGADETH was exceptionally important, because it had been so many years, and I've noticed an impact from it. People come up to us; I think we're probably much more recognized — just our faces, from that, our music. I think people in the mainstream know about MEGADETH that maybe didn't before. So I personally have actually noticed a nice little uptick from it that's been very, very cool, actually."