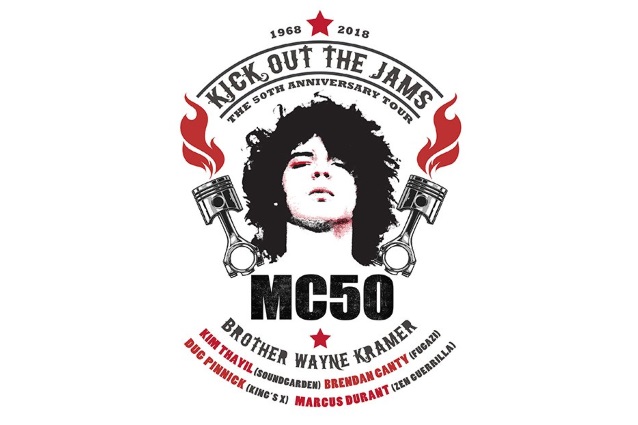 Wayne Kramer, the founding guitarist and leader of Detroit's proto-punk/hard rock band the MC5, will celebrate the landmark anniversary of its incendiary debut album "Kick Out The Jams" with the 35-plus-date "Kick Out The Jams: The 50th Anniversary Tour" and a memoir "The Hard Stuff: Dope, Crime, The MC5, And My Life Of Impossibilities" (Da Capo Press). Kramer has put together his wish-list worthy band of fellow travelers, dubbed MC50 — Brother Wayne on guitar along with guitarist Kim Thayil (SOUNDGARDEN), drummer Brendan Canty (FUGAZI), bassist Doug Pinnick (KING'S X), and the afro'd secret weapon frontman, 6-foot-7-inch Marcus Durant (ZEN GUERRILLA).

The North American tour begins in early September, after several European summer festivals, and culminates with an October 27 concert back where it all began: in Detroit in 1968, where "Kick Out The Jams" — recently cited by Pitchfork as one of the 50 best albums of the 1960s — was recorded live in front of a raucous home town audience at the Grande Ballroom on Halloween night. The band will announce full dates in the coming weeks, but tickets for The Fillmore Detroit go on sale at 10 a.m. EST on Friday, March 9.

"The message of the MC5 has always been the sense of possibilities: a new music, a new politics, a new lifestyle," Kramer says of revisiting the album. "Today, there is a corrupt regime in power, an endless war thousands of miles away, and uncontrollable violence wracking our country. It's becoming less and less clear if we're talking about 1968 or 2018. I'm now compelled to share this music I created with my brothers 50 years ago. My goal is that the audience leaves these concerts fueled by the positive and unifying power of rock music."

On the MC50 tour, Kramer and the band will play the album "Kick Out The Jams" in its entirety followed by an encore of MC5 material that will change each night. As for what fans can expect, Kramer explains: "This band will rip your head off. It's real, raw, sweaty, total energy rock and roll, like a bunch of 40-to-70-year-old 'punks on a meth power trip.' The world has lived with these songs burned in amber for half a century, so I'm not interested in a note-for-note reproduction of a record you've known your entire life. It's time to bring the monster back to life with supremely talented musicians who will interpret it in their own unique ways."

"Kick Out The Jams" is recognized as the galvanizing live document that introduced a major voice of late '60s counterculture and proved incomparably influential on metal, punk, stoner rock and almost every other form of loud, limitless, long-haired music to come. The recording took place just months after the band's appearance at Chicago's riotous 1968 Democratic National Convention — a pivotal moment in modern American politics. The MC5 recorded two more albums before imploding: 1970's "Back In The USA", produced by rock critic (and future Bruce Springsteen manager) Jon Landau, and their 1971 creative zenith, "High Time".

In "The Hard Stuff: Dope, Crime, The MC5, And My Life Of Impossibilities", to be published August 14 by Da Capo Press, Kramer chronicles his abusive childhood, his discovery of rock and roll through artists like Chuck Berry and THE YARDBIRDS, and the beginnings of the MC5, which he founded when he was a teenaged Downriver greaser obsessed with guitars, girls, and hot rods. He tells the unique story of a band that supplemented the usual sex, drugs, and rock and roll with radical politics of the White Panther Party, FBI surveillance, wiretapping, and more.

The heart of the book is an intimate portrait of Kramer's post-MC5 life, which included a federal prison term, addiction struggles that lasted decades, reconnection with his long-absent father, finding the path to sobriety at 50, and, incredibly, first-time fatherhood at the ripe age of 65. Channeling his revolutionary spirit into a life of public service, Kramer founded Jail Guitar Doors USA (with British troubadour Billy Bragg), a charity that rehabilitates prison inmates by helping them to express themselves positively through music. A story of second chances, "The Hard Stuff" charts Kramer's evolution from rock star to inmate to feature film composer to prison-reform advocate.

The MC5's original lineup played its final show on December 31, 1972, ending a turbulent existence marked by drugs, acrimony, financial woes, police harassment from Nixon and Hoover, and lots of unbridled, uncompromising, unequaled rock-and-roll fury. Original drummer Dennis Thompson, the only other living member of the MC5, will perform on select dates (to be announced). Singer Rob Tyner and guitarist Fred "Sonic" Smith died in 1991 and 1994, respectively, and bassist Michael Davis passed away in 2012.

The MC5's sonic thunder continues to reverberate a half-century after they first stormed the rock world, and "Kick Out The Jams: The 50th Anniversary Tour" is a rare chance to experience the album performed live again. "People come up to me all the time and say, 'Brother Wayne, 'Kick Out The Jams' changed my life,'" Kramer once said. "I usually tell them: 'I'm sorry, I can't change it back.'"