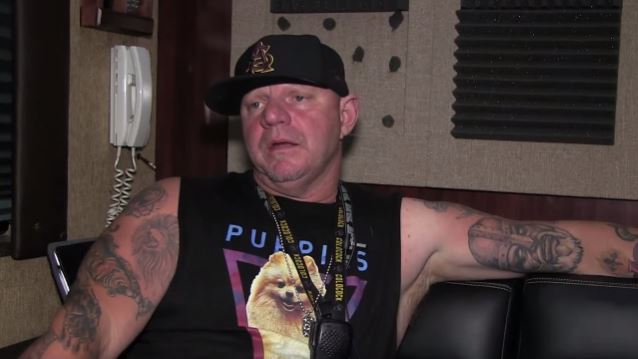 Rockstar Energy Drink Mayhem Festival producers John Reese and Kevin Lyman spoke to AltPress.com about the end of the event, which performed to smaller-than-usual crowds this year amid controversy over the way the event was booked.

SLAYER was this year's Mayhem headliner, but the main-stage lineup lacked the second big headliner of previous years. Past lineups have paired the likes of AVENGED SEVENFOLD and KORN, DISTURBED and GODSMACK or ROB ZOMBIE and FIVE FINGER DEATH PUNCH. This year, SLAYER was joined by KING DIAMOND, HELLYEAH and THE DEVIL WEARS PRADA. In addition, this summer's Mayhem Festival shrunk from four stages to two, and the overall lineup was trimmed by about half a dozen bands.

Asked if we see might see the return of Mayhem again someday, Lyman responded: "Maybe. I don't know. You never say never, right?"

He continued: "The biggest problem heavy music has right now is headliners, ultimately. You can't play amphitheaters with this massive production without bands that are hard ticket sellers.

"There was all this B.S. about it being a shitty lineup this year — but trust me, we beat the streets for a lineup. We didn't leave a single stone unturned.

"We're going to let dead dogs lie. [Laughs] We'll see what happens in the future. Who knows what the future holds?"

Asked why there are there fewer heavy music headliners now than in the past, Reese said: "Heavy rock bands aren't overnight sensations. It takes a lot of time, a lot of touring, some big songs."

He continued: "The business from publishing and recorded music is just in the toilet. Bands don't make any money, whereas a DJ can put a song out there and fly all over the world with a backpack. A pop artist can get on KISS FM or Hits 1 on SiriusXM. They can be in commercials and blow up quickly. When you're an aggressive rock band, there are fewer channels."

Reese added: "It's sad because Mayhem was a great avenue for the smaller bands. A lot of major labels are out of the rock business. They'd rather sign a DJ or a pop artist to a 360 deal, whore the song out all over the world and see a big return on their investment in a shorter period of time. The heavy rock space just doesn't work that way."

The 2015 Mayhem Festival generated controversy earlier in the summer after Lyman blamed the event's low ticket sales on the fact that metal has failed to produce new and younger headlining bands, adding that "metal got gray, bald and fat" and "chased girls away."

SLAYER guitarist Kerry King responded by saying that the problem with this summer's event lay not so much with the metal bands themselves but with the way the festival was booked.

"At the end of the day, what I think happened to Mayhem was that they waited too late in the game to get the talent they needed to pull it off correctly," Kerry said. "Because what happens is, people get booked up so early these days that it seems like all the bands that could have made this more of a success are playing in Europe now instead of being on a U.S. festival. It just made the talent pool less than it could be."