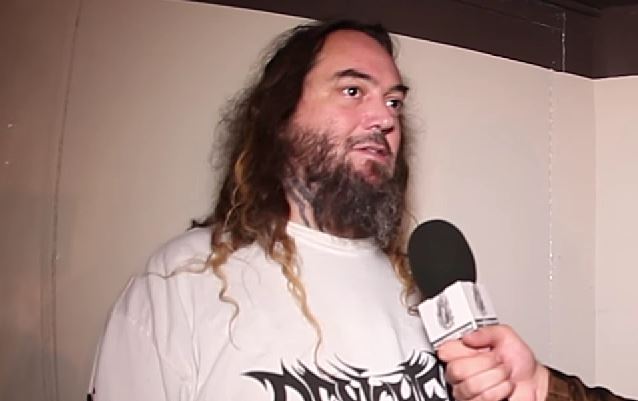 Jo Schüftan of Horns Up Rocks! conducted an interview with Max Cavalera (SOULFLY, CAVALERA CONSPIRACY, KILLER BE KILLED, SEPULTURA) on October 13 at Idle Hands bar in New York City. You can now watch the chat below.

Speaking about SOULFLY's current U.S. tour, Max said: "It's the first time I'm playing only SOULFLY [songs] on the whole show. Yeah, so I decided to experiment with that and see how it's gonna be, if some people are gonna be mad or if people will understand. And to me surprise, people really understand and they really like it. Even some people commented to me, they say they wanted to see that for a long time, because they think SOULFLY has so many records. We've got nine records out now, so it's a lot of music. And we do a pretty full setlist — an hour and a half, playing a little bit from every record; from the first one all the way to [SOULFLY's latest album] 'Savages'. And we're having a lot of fun. The lineup is the same: me, Marc [Rizzo, guitar], Tony [Campos, bass] and Zyon [Cavalera, drums]. And Zyon's kicking ass, doing great on drums. And we're just having fun, man, playing small places for the hardcore fans, which is what I like about this tour; it's an intimate situation [where] you get real close to your fans. You can actually smell them and get their sweat on you, and get the mic stand knocked down a couple of times. But it's a lot of fun, man. I'm really enjoying it."