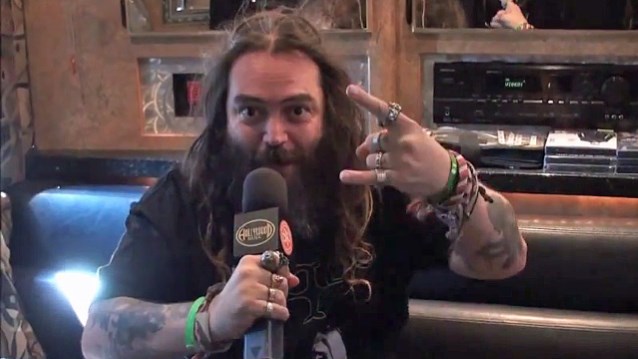 Groovey of Groovey.TV conducted an interview with Max Cavalera (SOULFLY, SEPULTURA, KILLER BE KILLED, CAVALERA CONSPIRACY) on April 29 in Denver, Colorado. You can now watch the chat below.

Speaking about SOULFLY's forthcoming album, "Archangel", which is tentatively due in August, Max said: "[It's a] really cool record. [It's] very exotic, mystic, really biblical. [It's] very, very heavy again. It's very influenced by the stuff I listen to right now — 1349 and BELPHEGOR, BEHEMOTH… I've been listening to a lot of death metal. Don't ask me why. I don't know why. I just fucking love the extremity of it. So, yeah, it's gonna be a really cool record. It's our tenth record. And I'm very excited for this album. And then I will tour for 'Archangel' probably for the next year and a half, two years, non-stop."

In a recent interview with Metal Wani, Max stated about "Archangel": "It's an interesting record. It's one of those [records] that come out once in a lifetime, an album like that comes out — really crazy sounds and very different dimensions. It's more experimental than the other stuff. It's still heavy as hell, and it's still fast. And Zyon's [Cavalera, Max's son] playing drums on it. He's actually playing really good. He reminds me of a young Dave Lombardo [SLAYER]. The fills that he's doing [are] really amazing; he surprised everybody in the studio. Matt Hyde is producing; he worked with SLAYER before. So it's really cool; a really good team."