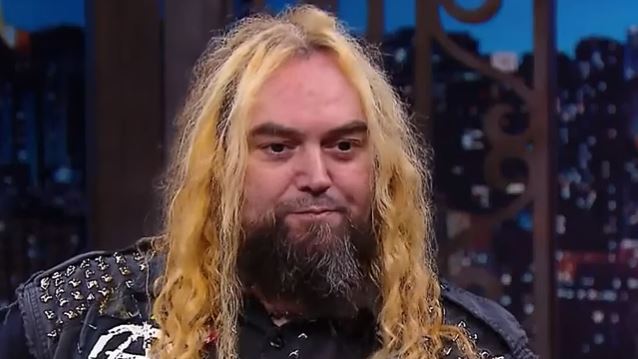 Jay Nanda of San Antonio Metal Music Examiner conducted an interview with SOULFLY frontman Max Cavalera and Max's sons Zyon and Igor Cavalera on April 22 in San Antonio, Texas. You can now watch the chat below. A couple of excerpts follow (transcribed by BLABBERMOUTH.NET).

On writing in his 2013 book, "My Bloody Roots: From Sepultura To Soulfly And Beyond", about his days of drinking and doing drugs:

Max: "About the drinking and the drugs, I did a lot of that, and I went to the edge, man. It was affecting my music, so about ten years ago, I quit evertything. I'm a pretty extreme person. Like, I do all or nothing; there's no middle [ground] with me, so once I decided to stop… [I didn't just] stop the drugs but continue the drinking, like some people do. It's, like, it's gone, it's done. And yeah, music became my drug, which is cool. It replaced what I needed to get from drinking and drugging; music is now my source. And that's why I became more active in the last ten years than ever before, releasing more shit — KILLER BE KILLED, CAVALERA CONSPIRACY, SOULFLY… tenth album, books… And I think it's kind of cool for people out there. I didn't want to preach in the book, but I wanted to kind of give a hint. If you're going through the same thing, it's possible to have fun without drinking and without drugs — like, just with metal, just with music. It's enough. And it's good. It's great way of living. So I put a little bit in the book — just to [share a little bit of my own personal experience with the] people out there. There is a way to live without that and still have fun and still let the music be your main source of inspiration."

On how he reconnected with his brother Igor in 2006:

"Well, he quit SEPULTURA and called me. It all came from him, actually, 'cause I was just waiting, man. I was, like, 'I'm not… I don't know how this is gonna turn out. But it's already been ten years without talking to him, which sucks, 'cause he's my brother and I love him. And it shouldn't be like this.' But thank God that he called and we made peace. And he was welcome back in my family. And then we started CAVALERA CONSPIRACY, which is a real kick-ass band. I loved the first record, 'Inflikted'; it came out really good. So we're just having fun now. And I think a little bit what happened to Dimebag was kind of an eye opener too, because he had a brother in a band too, Vinnie [Paul]. And I saw Vinnie after that, and you could sense the pain that he was going through. So it makes you really enjoy each moment together. So I really, now, enjoy the time with Igor a lot. It's much different than… When I was in SEPULTURA, I didn't care; it was, like, whatever. But now it's… When we do stuff together, like we're gonna play the whole 'Roots' album [from SEPULTURA] at the end of the year. It's gonna be fun and exciting. It's so good that our brotherhood and friendship, it's all back. We got to meet their kids, he met my kids. And he gave a couple of presents to Zyon, like some drum stuff from Brazil. So, yeah, it's all good. I just love the fact that everybody… We're connected together. Yeah, ten years, it was hard, it was difficult, stressful, sad, but it's life. You've gotta get through it and overcome, and we did overcome. And now the future just looks good. We're just gonna keep doing more stuff and more stuff, and the family will grow more and more, which is great."