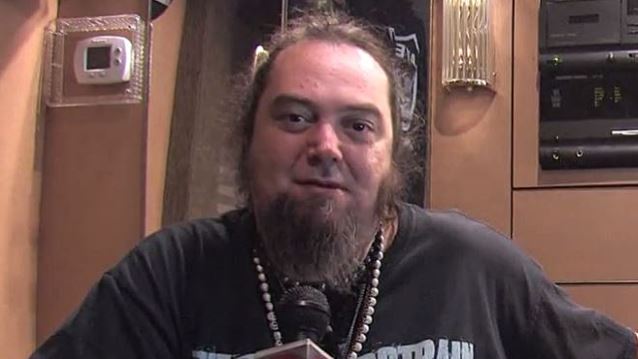 On November 6, Max Cavalera (SOULFLY, CAVALERA CONSPIRACY, ex-SEPULTURA) was interviewed on "The Chainsaw Symphony" radio program. You can now listen to the chat in the YouTube clip below.

Commenting on the recent passing of STATIC-X frontman Wayne Static, Max said: "It's sad, man. I never met Wayne. I heard stories through Tony [Campos, former STATIC-X and current SOULFLY bassist]. They were a really cool band when they were together. It's sad whenever somebody passes, like when I heard [Ronnie James] Dio passed, when I heard Paul Gray passed, when I heard Jeff Hanneman passed. It affects us all, because we're all in this together, and nobody is immortal; our time is gonna come somehow. But, unfortunately, for some of those guys it came early like that — he was only 48, man; I'm 45, you know. It's sad — sad for the family, sad for metal in general."

Asked if he ever thinks about how he is going to "go out," Max responded: "No, I try not to, 'cause you get depressed, and I don't wanna get like that. I try to stay in the moment, live for now. I don't even live too much in the past; I have all these cool records, but I don't even listen to them that much. I know they're there and I'm proud I made them. But I live for the moment and for the future. I just wanna stay busy and do stuff. That's what I'm here for."

Static, whose real name was Wayne Richard Wells, was just getting ready to head out on co-headlining tours with POWERMAN 5000 and DROWNING POOL when he died on November 1.

CAVALERA CONSPIRACY's third album, "Pandemonium", sold around 2,600 copies in the United States in its first week of release to debut at position No. 177 on The Billboard 200 chart.