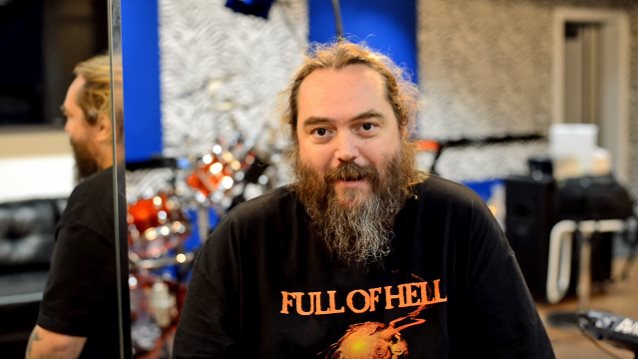 Max Cavalera says that we cannot let fear hinder us from living our life to the fullest in the wake of this month's Las Vegas massacre.

A gunman opened fire on October 1 from thirty-second floor the Mandalay Bay Resort and Casino during the Route 91 Harvest festival, killing fifty-eight people and wounding more than five hundred others. The gunman, identified by police as Mesquite, Nevada resident Stephen Paddock, later killed himself.

During a brand new interview with the "Talk Toomey" podcast, the former SEPULTURA and current SOULFLY frontman expressed his amazement at the the magnitude of the Las Vegas tragedy, saying (hear audio below): "It's crazy. It's a crazy world, man. It's mind-blowing that shit like that happens.

"We play festivals all the time — every year, pretty much, in Europe, we do the European summer festivals — and nothing like that ever happened," he continued. "But we saw what happened [in Las Vegas], and it's horrible, man. That didn't have to happen. It's just so crazy. And there's nothing, really, much you can do about that; it's a hard, hard situation, it's a hard-to-prevent kind of thing. It's just messed up, man. But what we cannot let happen is to stop — the festival has gotta continue, the show has to continue; people cannot stop playing live from fear of that; otherwise, we lost the battle."

According to Max, he has always refused to cower to terror and has insisted on fulfilling his touring obligations, even when other artists were quick to cancel their overseas trips.

"I'm kind of full-on… Even when the Paris shooting happened [in November 2015], we played Paris, like, a month after that; I think we were one of the first bands to play Paris [after the Bataclan massacre], so it was a big deal," he said. "And I was so proud to be back and playing for those people. And they needed it too — they needed the anger, they needed that metal to get that stuff out of them. So we had a great show.

"What we cannot let happen is stop doing what you do because of that, because of fear," he added. "Fear is a powerful thing. If you let it control you, it will ruin your life. So we cannot let that happen. We have to continue to do what we do, even with the risk of something like that happening. You have to carry on. You have to keep on going, keep on playing shows and going out there and giving the music to the fans, 'cause that's what we're here for."

Returning to the topic of the Las Vegas massacre, Max said: "It's sad. It's a real sad situation. I feel real bad for the families, for the people there who were just there to enjoy the show.

"I don't know much country [music], I don't like much [of it], but nobody should ever go to a show and get killed like that for no reason. It's ridiculous. It's a horrible situation. But, yeah, life goes on, man. We've just gotta keep going out there and playing."

Cavalera is currently taking part in the "Point Blank With Soulfly" tour, where SOULFLY is performing NAILBOMB's lone studio album, 1994's "Point Blank", in its entirety. The 31-date trek began October 6 in San Diego, California and will wrap up November 8 in Albuquerque, New Mexico. Support on the trek is coming form CANNABIS CORPSE and HARMS WAY on select dates in addition to NOISEM and LODY KONG.