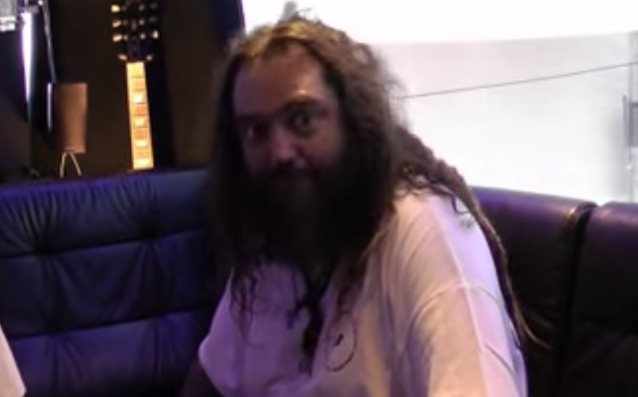 On June 21, Carmziofa of United Rock Nations conducted an interview with SOULFLY and CAVALERA CONSPIRACY frontman Max Cavalera. You can now watch the chat below.

Speaking about SOULFLY's forthcoming tenth studio album, "Archangel", which will be released on August 14 via Nuclear Blast Entertainment, Max said: "Well, I have not been excited for a SOULFLY record like 'Archangel' for ten years. It sounds really exciting, and I am excited. I worked with a great producer, Matt Hyde [SLAYER, CHILDREN OF BODOM], and he understood what I wanted to do: this, kind of, exotic, mystic, biblical kind of record. And he helped me get through, and we did a lot of cool stuff together with the vocals; there's a lot of chanting and things I've never done before with my voice. It still sounds like Max, but there's a different feeling to it. And there's some trademarks on it. Like the first song's called 'We Sold Our Souls To Metal', it's a pure metal anthem. It's a great song — a declaration of proudness of being metal, and live metal, live the metal life. So it's, for me, my most honest way to tell the fans that I'm proud to be metal and I sold my soul to metal, so you should [sell] your soul to metal as well. It's a cool song… I don't know… I like the album artwork. Eliran [Kantor; TESTAMENT, ICED EARTH, SODOM] did it. And I really like the colors. I think it's gonna be a big SOULFLY record. It's our tenth record, so that's special in itself. It's not every day you release a tenth record. That's a feast on its own. That's a survival feast. [There's] a bit [of the] Middle East [influence] in the guitar. There's some riffs that are very Middle Eastern riffs and kind of Babylonian riffs. So it's pretty cool. That's from me listening to MELECHESH and BEHEMOTH and stuff like that."

The lyric video for the song "We Sold Our Souls To Metal", taken from "Archangel", can be seen below.

Max previously told Metal Wani about the mindset that is required to write a track like "We Sold Our Souls To Metal": "It just happens. You can't explain it. It's one of those things… [When] you play it, it has an instant reaction on the listener."