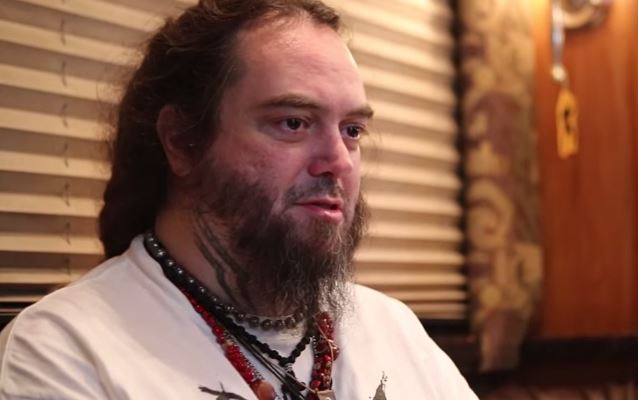 Max Cavalera (SOULFLY, SEPULTURA, CAVALERA CONSPIRACY, KILLER BE KILLED) was interviewed on the March 6-8 edition of Full Metal Jackie's nationally syndicated radio show. You can now listen to the chat using the Podbean widget below.

Full Metal Jackie: Max, you've been a part of quite a few bands — SEPULTURA, also, of course, SOULFLY, CAVALERA CONSPIRACY and KILLER BE KILLED. Creatively, why is it so important for you to have so many different ways to express yourself?

Max: "It's fun. I always loved playing with other musicians. When I was with SEPULTURA, we did a lot of collaborations with other people, and eventually that led into my first project I did, which was NAILBOMB. A lot of people really like NAILBOMB a lot; it became kind of a cult record. We eventually killed NAILBOMB; me and Alex [Newport], we didn't wanna do too much with it. And then, throughout the years, everything just kind of changed. I ended up leaving SEPULTURA and creating SOULFLY. Later on, I got reunited with my brother [former SEPULTURA drummer Igor Cavalera], so I created CAVALERA CONSPIRACY. And then the last thing that came was KILLER BE KILLED, which was an invitation I got from Greg [Puciato] from THE DILLINGER ESCAPE PLAN to create this group and make some music with him. I always enjoy and have fun with the music. It's more music for the fans. I think the more the better. I don't think there's a limit on what you can do. I think it's up to you, whatever you wanna do, and I just thought it's kind of cool and kind of exciting to not be just in one band but actually have a bunch of different things going on."

Full Metal Jackie: You performed PANTERA's "Walk" on the 70000 Tons Of Metal cruise. Do the albums that you loved back in the day still make you excited when you hear them now?

Max: "Yeah, that was a lot of fun. I love the song; it's one of my favorite riffs, I think, of all time. In fact, I asked Terry Date, which is our producer of our last SOULFLY album, 'Savages', because he was the producer of PANTERA when they made 'Walk'. So I asked him, 'Did you guys just have a heart attack when that riff came on? Did time stop in the studio?' And, to my surprise, he said 'no.' It was in the middle of a bunch of other songs, [and] they didn't even notice that it was a special song. But I love the song, and it was so cool to do that at the 70000 Tons Of Metal. It was just a lot of fun singing those lyrics. Phil's [Anselmo] lyrics are great lyrics. And, for me, it was an honor. And it was cool to give a little tribute to Dimebag as well."

Full Metal Jackie: Max, if you never got into music, what other ways do you think you would have creatively expressed yourself?

Max: "Probably crime or drugs. No. [Laughs] I'm just kidding. I don't know. I always liked art-related stuff. I like a lot of painting. I actually do a little bit of my own — I paint t-shirts and things like that in the back of the bus. They're not really good, but it's still kind of a cool hobby. So it would be something related to art. I love artwork and I think that's the kind of stuff that I'm into. Either artwork or… Lately, I've actually been reading a lot of books. I got into books lately and it's been really cool to read a couple of different biographies. Since I did my own biography, I became interested in reading other people's biographies. So I read Ozzy's [Osbourne] biography, and I read Lemmy's, and it was really cool. But mostly artwork; that's what I like the most."

Full Metal Jackie: What made SEPULTURA so special that people hope you and your brother would rejoin the band?

Max: "Oh, I don't know. It's one of those things, one of those bands that just kind of happened. It's not every day that a band from Brazil comes out on the scene like that. I think we made a big impact, especially 'cause we were from Brazil, which was a country that was not popular for heavy metal, and we put Brazil on the map of heavy music in the world. So I think a lot of people liked that, and a lot of people were connected to that, especially in the Latin countries. We're still very respected. There's a huge fan base in a lot of the Latin countries for a lot of fans of SEPULTURA. And I think what we did was pretty cool too. We never really repeated ourselves. We kind of… At least with me, the records that I made with them, we tried to keep them different. We kind of never looked back, [and we] always looked forward, and you can see the difference from the records, from 'Beneath The Remains' to 'Arise', from 'Arise' to 'Chaos A.D.', and from 'Chaos A.D.' to 'Roots'. They're all different records. We were never afraid to take a new step and a new direction."

Full Metal Jackie: When you worked on your autobiography with Joel McIver, what did you realize for the first time about your life and career by looking at it as a comprehensive whole?

Max: "A lot of crazy stuff. A lot of wild episodes. Starting from my own childhood in Brazil to stuff that I was born into, like my mother's religion. Right before my father died, he took me to be baptized at the Vatican. And crazy stuff like that, which doesn't happen to a lot of people. And then, of course, there's the music, which is a huge part. Music became like a salvation for me. If it wasn't for music, the odds of becoming something in Brazil were very, very minimal. So music really saved me from a lot of trouble. I think, for me, making the book was really cool to look back at all the stuff. There's a lot of funny stuff, like puking on Eddie Vedder [PEARL JAM] and pissing off Lemmy, and then there's a lot of sad stuff, like the split from SEPULTURA and the death of my father, the death of [my stepson] Dana [Wells]. It's a full book; a lot of insight went into making the book. And I have to be thankful for the people involved too. Joel McIver did a great job. Dave Grohl did a great intro for the book. Everybody really collaborated and made it a great book for people to read."