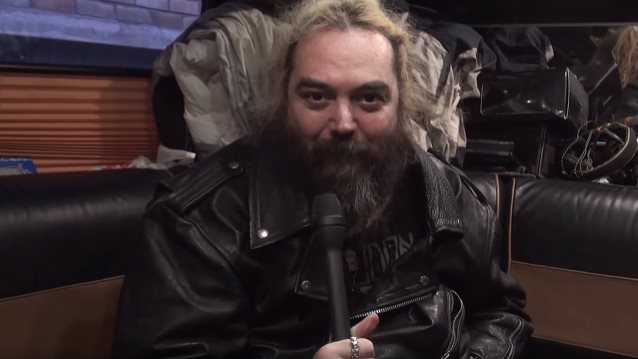 Finland's Kaaos TV conducted an interview with former SEPULTURA and current SOULFLY frontman Max Cavalera on March 9 at Nosturi in Helsinki, Finland. You can now watch the chat below. A couple of excerpts follow (transcribed by BLABBERMOUTH.NET).

On his plans to stage a 20th-anniversary tour for SEPULTURA's "Roots" abum with his brother — and CAVALERA CONSPIRACY/ex-SEPULTURA bandmate — Igor:

Max: "Yeah, it's right now in the stages of organizing that, and we're gonna see what we can do to make it special. We found some stuff, like the original 'Roots' backdrop, so we get to use that. And there's two faces that were on the stage during the last 'Roots' tour — they are Brazilian faces — so we're gonna use that. Igor is very excited, I'm very excited. I think it's cool [to celebrate] twenty years. It's an opportunity to play the whole record. So I think it's gonna be really good."

On whether there is any talk of bringing the "Roots" 20th-anniversary to Europe:

Max: "I think if it works out and people like it and accept it, then we can come to Europe with it, which I think will happen. I would love to bring it to here too. It would be awesome. It's a good idea, and I think it would be worth it to come here and do it here as well."

Max: "It was hard, but there was also the other side of the coin; it was exotic, so people were interested in us. So it created a kind of curiosity about [us]: 'Who are these Brazilian guys?' And I think what we did was cool, because we found our own way. We created albums that… We started like a copy of European bands like KREATOR and CELTIC FROST, and then became our own thing with stuff like 'Beneath The Remains', 'Arise', 'Chaos A.D.' and 'Roots'. We found our own identity, you know, and I think that's really important that the band did that. It was, for me, very… Especially the 'Roots' album was very special, because I got to go visit a tribe in Brazil. Growing up in Brazil, we'd never seen a tribe — only what we heard and saw a bit on TV and sometimes on a National Geographic special. But to be there physically with them was super special."