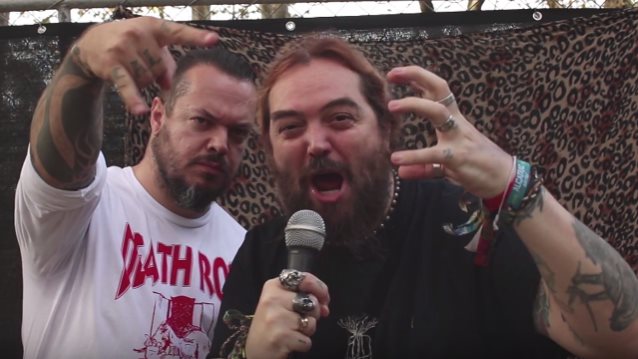 Former SEPULTURA and current CAVALERA CONSPIRACY members Max Cavalera (guitar, vocals) and Igor Cavalera (drums) spoke to Capital Chaos TV about the "Return To Roots" North American tour during which they are celebrating the twentieth anniversary of SEPULTURA's classic album "Roots" by performing the LP in its entirety. The chat — which was conducted at this past weekend's Aftershock festival in Sacramento, California — can be seen below.

Asked if CAVALERA CONSPIRACY has begun work on material for the follow-up to 2014's "Pandemonium" album, Max said: "[There hasn't been] a whole lot of writing. But just feeling… feeling about what should we do next. And we talked a little bit about it."

Added Igor: "There's some inspiration from [the 'Return To Roots'] tour that's really cool also. Because the approach we have with CAVALERA is something very minimal, very direct, and by going back to 'Roots', I think we might try to experiment a little more with CAVALERA, something that we haven't done. But by doing this in a fresh way, it was very inspirational. For me, that was, like, 'Yeah, we can do some crazy, new tribal stuff — different than what we did in the past: heavier or whatever. So I think a lot of cool stuff will be coming in the future."

CAVALERA CONSPIRACY's third album, "Pandemonium", was released in November 2014 via Napalm Records. The CD was produced by John Gray, who has previously worked with SOULFLY.