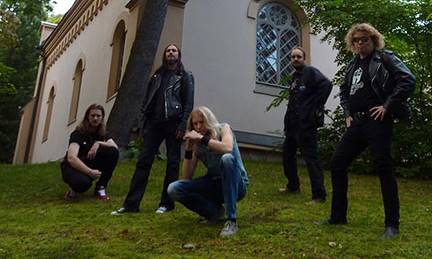 Cruz Del Sur Music has announced the signing of Finnish newcomers MAUSOLEUM GATE. The band's self-titled debut album will be released in mid-October on compact disc, vinyl and digital formats.

A glorious and pure offering of retro hard rock/heavy metal, deeply rooted in a late- '70s/early-'80s atmosphere, "Mausoleum Gate" was forged in the blood of SAXON, in the power and rudeness of the NWOBHM movement, in the spritual, epic nature of CIRITH UNGOL as well as the elegance of URIAH HEEP.

MAUSOLEUM GATE's sold-out cassette EP, "Gateways For the Wicked", will soon be re-pressed by the band itself on compact disc, so watch out for it at the next Keep It True festival.