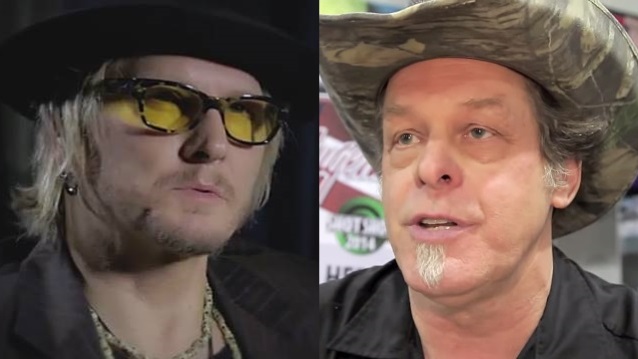 Earlier today, the former GUNS N' ROSES drummer took to Twitter to comment on a specific photo he found of Nugent in which Ted can be seen smiling while standing next to a preteen boy after apparently killing a groundhog with his bow and arrow.

"Hey @tednugent u are a sick individual , u are smiling too much for killing this animal. Something wrong w u, poor kid," Sorum wrote (see tweet below).

In a February 2014 interview with PennLive.com, Nugent attacked animal-rights activists who, he said, were under "the influence of mind-altering chemicals to think the animals that feed us have the same right as you and me."

"So do animals have the same rights before the barbeque or after the barbeque?" Nugent said.

Nugent added that hunters and trappers had helped create the most successful wildlife management system ever seen in history.

"Someone wants to ban this?" he said. "I laugh in their face and kill extra animals for these numb-nuts. Yes, we are under attack, but they are losing and we are winning."

Although Sorum's passion has always been the drums, in recent years he has turned his attention to larger social issues. He co-founded Adopt The Arts with the aim of ensuring that all school children have an opportunity to express themselves creatively through art and music.

Matt and Adopt The Arts formed a partnership with International Fund For Animal Welfare to bring education and awareness of elephant conservation into elementary schools in the Los Angeles Unified School District through the IFAW Animal Action education program. As part of this initiative, hundreds of students from 40 schools participated in the Love Elephants art contest, which was displayed in a public exhibit at Bergamot Station Arts Center in the spring of 2013.

Hey @tednugent u are a sick individual , u are smiling too much for killing this animal Something wrong w u, poor kid pic.twitter.com/at5ux3QiPM