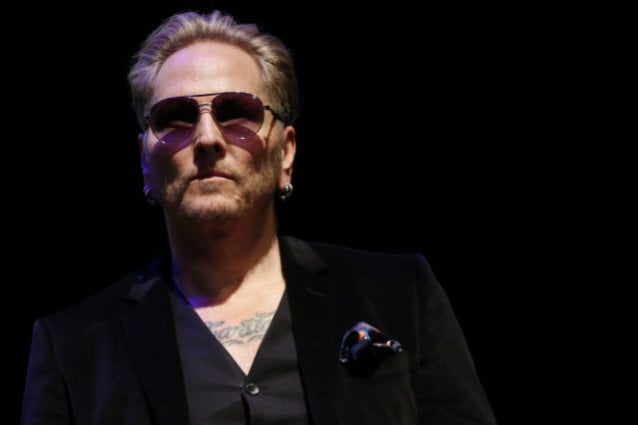 Drummer Matt Sorum (GUNS N' ROSES, THE CULT, VELVET REVOLVER) says that he wants to make an album with his all-star band KINGS OF CHAOS.

Originally formed in 2012 as ROCK 'N' ROLL ALL STARS, KINGS OF CHAOS features a core lineup of members as well as a rotating cast of guest musicians, including well-known personalities from ZZ TOP, DEF LEPPARD and STONE TEMPLE PILOTS.

During a recent appearance on the "2 Hours With Matt Pinfield" podcast, Sorum talked about the formation of his rock and roll collective and his plans for the all-star project. "The music business is more difficult to navigate than ever, especially for a guy that's been around a while," he said. "I've had an illustrious career, but it's always been, like, super-high, super-low, like riding the wildest roller coaster ever known to man. [Laughs] Emotionally, it's been challenging. When VELVET REVOLVER broke up, for me, it was like, 'Oh my god, I can't believe I pulled off another band.' So it kind of knocked the wind out of me, and I didn't really want to jump back into doing another band or project right away.

"When I started doing KINGS OF CHAOS, it became strictly about fun," he continued. "I decided, 'I'm going to pull a bucket list, [and] I'm going to call guys that I never had the balls to call, and have no fear. There's one or two answers that you can get — yes or no. And you've got to be able to accept no. Don't take it personal. I called Keith Richards. I called Jimmy Page. I called [Robert] Plant. I didn't care. I was just, like, finding them and calling them. And some of them said yes — not Robert Plant, dammit [laughs] — but Steven Tyler, Robin Zander, Billy Gibbons, Joe Elliott, Slash, the DeLeo brothers. I go and play with my friends, and it's a blast. Now, I'm going to morph it and make a record. I'm trying to figure out how the hell to do it, because everybody's got bands."

Sorum, who turned 57 in November, also talked about the perils of the rock 'n' roll lifestyle, especially as it relates to classic rock musicians whose best days are behind them.

"When you're young [and] in rock n' roll, we're slapped in the face with that every day — like, 'You're in a rock n' roll band!' You feel like you almost have to wave the flag, because rock n' roll from where we come from, the '70s and stuff, that was part of the deal," Matt said. "If you were in LED ZEPPELIN and you were John Bonham or Jimmy [Page], that was just, like, part of [it]. The gig part of it [too], but wrecking Rolls-Royces and swimming pools with Keith Moon and, you know, throwing TVs out windows and being destructive to yourself... Obviously, we lost John Bonham and we lost Keith Moon. That was the first time when I ever realized, 'Holy shit — I just lost two of my biggest heroes,' but I still didn't quite figure out why. I just thought, 'That was cool,' that they were these bigger-than-life personalities, and I felt that I had to kind of be that if I wanted to succeed. Now when I see guys that are older still partying, I'm just like, 'Man, time to tighten it up, bro. Clean it up, man. It's a bad look now.' It's like it's acceptable when you're young to be crazy. [But] partying and all that stuff was great. A lot of people that get clean go, like, 'Oh, man. It was all horrible.' I go, 'That's bullshit. What happened was, you started out having a lot of fun, and then the fun got out of control, and then it became a problem.' When it becomes a problem, you've got to nip it in the bud."

One artist who sadly never managed to conquer his demons is Sorum's former VELVET REVOLVER bandmate Scott Weiland. The ex-STONE TEMPLE PILOTS singer was found dead on his tour bus in December 2015 at the age of 48 from a toxic combination of drugs and alcohol, including cocaine and ecstasy. He was touring with his band THE WILDABOUTS in support of their album "Blaster".

"Duff [McKagan, VELVET REVOLVER and GUNS N' ROSES bassist] is the one that called me and told me about Scott," Matt said. "It was shocking, but it was not unexpected. At the same time, I thought Scott was a lifer. I thought he was like Keith Richards, and so did he. It was like one of those guys that just could keep hitting it, and it wasn't going to kill him. He'd been through so much — so many rehabs and so many things — that I thought, 'This guy is not going to die. He's just going to live through it all and be a lifer.'"

With all the ups and downs in his career, Sorum, who was inducted was inducted into the Rock And Roll Hall Of Fame in 2012, says that he has found a way to keep things in perspective.

"The one thing that keeps me rolling at all times, because my career isn't as big as it used to be or whatever, it's purely about gratitude," he explained. "I've got to remember where I've been or what I've done, because we live in Hollywood. People walk to me every day and they go, 'So, what are you doing now?' I'm like, 'Oh, haven't I done enough for you yet? I'm sorry. Actually, I'm living in Palm Springs, driving my '62 Galaxie, walking my dog. Is that cool?' [Laughs]"

Sorum has said in the past that a GUNS reunion tour should have included both him and Adler, with each playing the songs they recorded with the group.