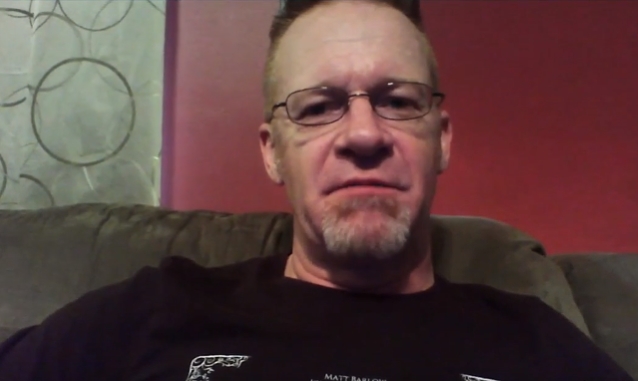 Matt Barlow says that he is "not offended at all" by Jon Schaffer's recent announcement that he is planning to re-record some of ICED EARTH's early albums with the band's current lineup.

Speaking to The Metal Voice in an interview conducted earlier today (Saturday, September 22), the singer, who fronted ICED EARTH from 1994 to 2003 and again from 2007 to 2011, said: "As far as my cut, whatever I contributed to the writing of the songs I'll still get. So from that aspect, from the financial aspect, if people wanna buy the records again, that's great for me, financially, 'cause I still get writing credit for it.

"Basically, I signed away my performance rights — I got paid for my performance, but the writing is where I would get paid [if the albums were to get re-recorded]," he continued. "And I don't have a problem with it. If those guys are getting paid for redoing the records, it doesn't hurt my feelings at all. And those other records will always be out there — there will be versions of it, hopefully, that people can buy, if they so choose; if they want both copies or whatever, then that's fantastic."

Barlow went on to reiterate that there are "no hard feelings" between him and the ICED EARTH guitarist on the issue of re-recording the band's earlier catalog, explaining: "That would just be an ego thing, if anything. I can't really say that I've got that — that's not part of who I am.

"It's so hard for musicians to make a living, and if these guys are musicians that are trying to make a living doing it — and they are; Jon is, and Jon has made his living with music," he said. "If he can make some more money to keep ICED EARTH going, then more power to him, man. That's just the way I see it. It is his livelihood, and it's his company, above all things. He's had to use record companies to keep that going, but at the end of the day, it is his company, and he's gotta keep it going, man. And if everybody wants him to keep it going, then they've gotta understand that that's what he's gotta do.

"So, no, I'm not offended at all — as I hope that Gene [Adam, original ICED EARTH singer] wasn't offended when I redid the vocals on ['Days Of Purgatory', 1997 collection of remixes and re-recordings of songs from previous ICED EARTH albums]," Barlow added. "At that particular time, we all thought that I was gonna go on and be with ICED EARTH forever, and we were basically trying to redo the songs in my style, so then when we do 'em live, that's the way that people were gonna hear 'em. But there are still people that are going back and buying the Gene [versions of the songs]. There's a lot of ICED EARTH fans that still love the first record above all others — and with good reason, 'cause it's really cool stuff, and it's different; it's just different. So there's nothing wrong with that."

Late last year, Schaffer spoke about his reasons for wanting to re-record some of ICED EARTH's earlier albums with his current bandmates: Stu Block (lead vocals), Luke Appleton (bass), Brent Smedley (drums) and Jake Dreyer (lead guitar). He said: "We are going to be re-recording [our older] records over the course of, probably, the next 10 years. We're going to be doing a lot of the ICED EARTH catalog because I don't own the master rights and there's no real income coming from that. If we redo those records, then everybody in the band will be able to get a royalty in the future moving forward. It's going to be a big project and it's going to be a lot of fun to do, to really dig back into those records — especially, like, the first six. That's what we're gonna focus on. I don't know which one we're gonna start with yet. I have a pretty good idea which one, but the guys and I will talk over that in the next few months. Not to take away, because I think those albums are great, but the fact is that it was a bad business deal for ICED EARTH, and for us going forward, we want to be able to have control of our catalog and of our destiny."

Schaffer went on to say that he will "never" own the master rights to ICED EARTH's early recordings released through Century Media "unless, all of a sudden, they develop a conscience and say, 'Jon should own his masters.' [Laughs] And believe me, Sony Records did not buy Century Media to start giving artists their rights back. So it's pretty unlikely. And, you know, it's business, and dude, hey, I signed, we all signed it — the original five guys from the first album, we all signed a very horrible contract. I just finished it. I went and pushed through to the bitter end."

ICED EARTH is continuing to tour in support of its latest album, "Incorruptible", which came out in June 2017 via Century Media.