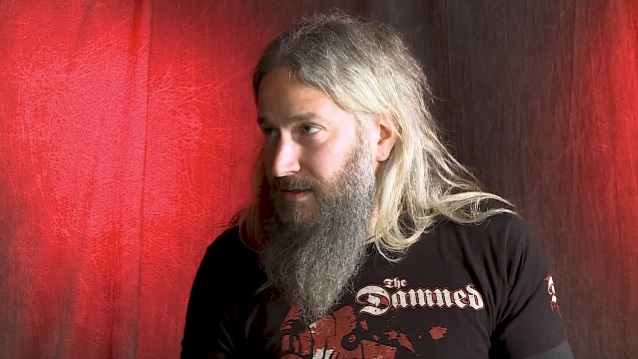 MASTODON singer/bassist Troy Sanders spoke to HardDrive Radio about finally winning a Grammy in the "Best Metal Performance" category at the 60th annual Grammy Awards on Sunday (January 28) at Madison Square Garden in New York City. MASTODON got the nod for the song "Sultan's Curse" from its 2017 album "Emperor Of Sand", with the latter also being nominated for "Best Rock Album."

"It's pretty surreal," Troy said (see video below). "I think it's great, just because the attention that you get, not only us, but all five bands that were nominated for this 'Best Metal' category, it brings good attention to all of 'em, all those bands, us included. I truly feel that we're all in the same boat.

"We never started a band with the end result wanting to be a trophy or a Grammy Award [winner] — that's the furthest thing on your radar when you find some friends to start a band with. So it was unexpected to get to this point, but now that we have gotten here, to get that kind of recognition, I think it's nothing but positive."

It was the fourth and fifth time MASTODON had received Grammy nominations, having missed out on the three previous occasions — "Colony Of Birchmen" (2007), "Curl Of The Burl" (2012) and "High Road" (2015) — it had been up for the "Best Metal Performance" award.

Asked if he and his bandmates were disappointed when they failed to win the award in the previous years, Troy said: "We were nominated three times prior to [Sunday], and we did go to all three ceremonies, and when our name wasn't called, I felt no disappointment because I didn't have that expectation, being super optimistic all the time.

"I'm a part The Academy now, because once you're nominated, you're a part of it. And you get the voting sheets months prior to the Grammys, and you see that each category has hundreds and hundreds of options," he explained. "'Rock Album' of the year — there's, like, eight hundred rock albums that came out. 'Song' of the year — there's thousands of songs. So when all of that gets dwindled down to the five nominees, I really feel like that's incredible — just to be the five that were pulled out of this pool of hundreds. So I kind of feel that's a win right there, just to be nominated. I know it might sound kind of dorky, but I really feel that way.

"To have [our] name called [Sunday] night was unexpected and then this rush of bizarre emotions came over us — just because it was the furthest thing that we ever expected," he added. "It was a rush of awesomeness, really.

"But no, we weren't disappointed the previous three years. We were just kind of happy to be there."

According to The Atlanta Journal-Constitution, MASTODON drummer Brann Dailor said backstage that the award was "huge for us and for heavy metal. It's one of the greatest genres with some of the most talented and skilled musicians playing it."

Prior to Sunday's event, Dailor told myStatesman that a MASTODON Grammy win would be "an exciting thing for heavy music. I feel like it's a cool thing for people in bands right now to see it as a possibility — that you can go from playing basements and VFW halls and booking your own tours and playing tiny clubs to winning a Grammy, that it's still a possibility and — quote unquote — the American Dream" he said.