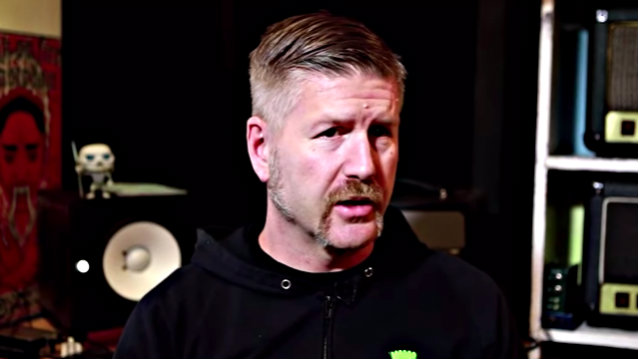 MASTODON guitarist Bill Kelliher spoke to the Atlanta Business Chronicle about overcoming alcohol addiction and the process and help it took to get there. He said: "I just realized I was I was overindulging and it was starting to harm other people and I needed to stop being selfish, because I almost died when I had pancreatitis in London," he said. "It was 2008-2009 when I got sick and almost died from pancreatitis and that was a direct cause of drinking too much for many, many years and putting my pancreas out of commission. That's when it really all started for me, because I come from a pretty alcoholic family, as most people do. I just kind of decided, 'I need to curb this. I'm killing my wife and she's sticking with me through all this [expletive] I've been doing.'

"You hurt the people around you the most," he continued. "I don't want my kids to see their dad like this drunk person. Luckily, my kids have never seen me drunk, so I don't have to worry about that.

"You just have to think of things that you're that you're grateful for," he added. "I'm grateful for everything, for every moment that I have had the chance to be alive and to do what I do for a living. It's amazing. I have such a wonderful family and my wife and my kids are amazing.

"You can't think about yourself. You have to think about the people around you and the people that care about you and love you and don't want to sit there watch you destroy your life over alcohol and some drugs."

Kelliher told Democrat & Chronicle in a 2015 interview that he used to drink so hard he had to be hospitalized because his liver was shutting down.

He previously said that his refreshed interest in composing music has been a lifesaving experience for him.

"When I was drinking all the time, I didn't really care about writing," he said. "I mean I thought I did. I thought I cared about writing. But I really didn't care about anything but drinking, and that's what it does to you. You don't realize it until you've stopped and figured it out on your own because no one can tell you. It took my life over and almost killed me."

He continued: "I would never wake up early and start writing or actually exercise or do anything that was good for me. I was just chugging along in life. And once you stop drinking or putting down the drugs and start living life on life's terms, it's a totally different experience when you write a song. You feel good about it and it really comes from the heart, comes from that special place. It's not some hung-over feeling, like, 'I just don't feel like putting any effort into anything anymore.' That's how it was getting for me and that's why I had to stop."

Last month, MASTODON released a new EP featuring four previously unreleased tracks. "Cold Dark Place" was made available digitally and on CD on September 22 via Reprise Records, followed by the release of a limited-edition ten-inch vinyl picture disc on October 27.