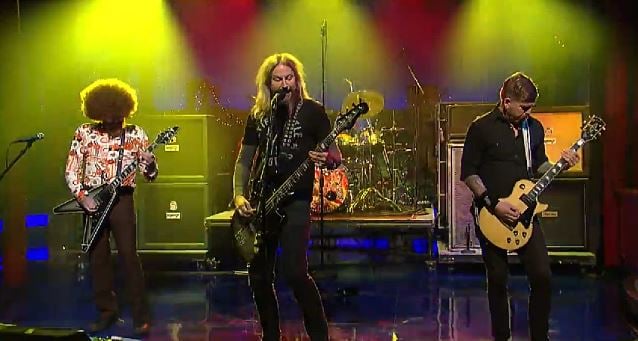 Atlanta progressive metallers MASTODON are working on a video for the song "Asleep In The Deep", taken from the band's current album, "Once More 'Round The Sun". The group is collaborating with Atlanta-based special effects guru Shane Morton and renowned American artist Skinner (cover artist for "Once More 'Round The Sun") on what is being described as "a short film that will feature bizarre imagery and psychedelically hued, possibly disturbing and disorienting concepts, starring cats."

As previously reported, MASTODON will re-release all of its Reprise titles on vinyl in the coming months. The first album in the series is 2006's "Blood Mountain", which was issued on March 3 on a mix of solid yellow and transparent green vinyl. "Blood Mountain" placed at No. 9 on Rolling Stone's Top 50 Albums of 2007.

On June 2, 2009's "Crack The Skye" will be released on baby blue vinyl. Earning MASTODON unanimous critical praise, the album led to Rolling Stone calling them "the greatest metal band of their generation — no one else comes close".

On August 4, 2011's "The Hunter" will be released on a mix of solid white and solid red vinyl. The band's first Top 10 album, "The Hunter" was also met with united critical acclaim and spawned the singles "Black Tongue", the Grammy-nominated "Curl Of The Burl" and "Dry Bone Valley".

On October 5, MASTODON's current album, 2014's "Once More 'Round The Sun", will be released on a mix of transparent green and solid white vinyl. The band's highest charting album, with a No. 6 debut on Billboard's Top 200, The album's single "High Road" has been nominated for a 2015 Grammy Award for "Best Metal Performance".

On December 8, MASTODON will release a limited-edition box set featuring all of the band's Reprise titles on vinyl. Only 500 will be made available.

As an added bonus for fans, MASTODON released a limited-edition 12-inch vinyl picture disc in celebration of Record Store Day on April 18. The disc is comprised of a new song titled "Atlanta", featuring guest vocals from Gibby Haynes from BUTTHOLE SURFERS, originally only digitally available as part of the Adult Swim Singles Series. The B-side is an unreleased instrumental version of "Atlanta", and is exclusive to this very limited Record Store Day pressing.