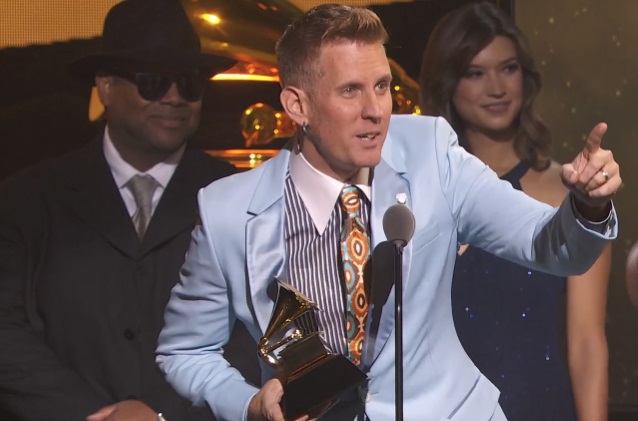 MASTODON was honored with a Grammy in the "Best Metal Performance" category in the pre-telecast ceremony at the 60th annual Grammy Awards, which is being held tonight (Sunday, January 28) at Madison Square Garden in New York City. MASTODON was nominated for the song "Sultan's Curse" from its 2017 album "Emperor Of Sand".

According to The Atlanta Journal-Constitution, MASTODON drummer Brann Dailor said backstage that the award is "huge for us and for heavy metal. It's one of the greatest genres with some of the most talented and skilled musicians playing it."

"Our first show had hundreds of people and they came out to support us from the time we were playing the Parasite House to the Fox Theatre," he said.

Prior to tonight's event, Dailor told myStatesman that a MASTODON Grammy win would be "an exciting thing for heavy music. I feel like it's a cool thing for people in bands right now to see it as a possibility — that you can go from playing basements and VFW halls and booking your own tours and playing tiny clubs to winning a Grammy, that it's still a possibility and — quote unquote — the American Dream" he said.

This afternoon's pre-telecast ceremony, which is handing out 75 of the 84 categories, is taking place at the Theatre At Madison Square Garden, with Paul Shaffer hosting and leading the WORLD'S MOST DANGEROUS BAND, which opened with an instrumental take on THE ROLLING STONES' "Bitch", the first time they've played together since "Late Night With David Letterman" went off the air. The presentation is being streamed live on Grammy.com and CBS.com.