Atlanta progressive metallers MASTODON will release a new single, "Fallen Torches", on Friday, July 31. The track is taken from what appears to be a new rarities compilation titled "Medium Rarities", which is scheduled to arrive on September 11.

A short "Fallen Torches" preview is available on the lightthetorch.mastodonrocks.com web site.

Some fans have speculated that "Fallen Torches" is the "heavy" new song MASTODON recorded back in December 2018 but has not yet released. In January 2019, MASTODON guitarist Brent Hinds described the tune to Kerrang! magazine as "a fun listen," while fellow axeman Bill Kelliher said that it was "a basher" and "brutal." Drummer Brann Dailor concurred, telling the publication: "It's as heavy as I've heard us in a while."

Dailor recently spoke to Metal Hammer magazine about the progress of the songwriting sessions for 2017's "Emperor Of Sand" album. He said: "It's all over the map. There's some big, big heavy riffs that are happening, so that's what I'm into. And then there's some guitar gymnastics by Brent Hinds that have been some of the most difficult things I've tried to wrap my ahead around and play drums to. So there's some super-progginess coming from him, and some really super, pretty moments. But there's some rockers in there, too. There's some heavy, fast stuff as well. But a lot of it is kind of doomy. But that's where we're at."

In May, Kelliher told the "Rock & Roll Beer Guy" podcast that the music he has been writing for MASTODON's next album is "different than 'Emperor Of Sand', but there's definitely a vibe going on… The new record, the stuff I've written, is not quite as notey as that, but it's definitely got more NEUROSIS heaviness, simplified guitar parts. And Brann, he always demos most of the vocal ideas, 'cause he always has melodies, and he's been singing on a lot of it, at least for the demo purposes. The vocals are kind of 'Asleep In The Deep' style — kind of RADIOHEAD-ish almost, real melodic, just a lot of vocal harmonies."

Earlier in the year, MASTODON wrote and recorded a new song for inclusion in the upcoming "Bill & Ted Face The Music" movie.

"Bill & Ted Face The Music", which reunites Alex Winter and Keanu Reeves in the title roles for the first time since 1991's "Bill & Ted's Bogus Journey", is scheduled for a September 1 release.

"Bill & Ted Face The Music" will not be the first time a MASTODON track has been featured in a motion picture. Back in 2007, MASTODON performed the opening song of "Aqua Teen Hunger Force Colon Movie Film For Theaters". 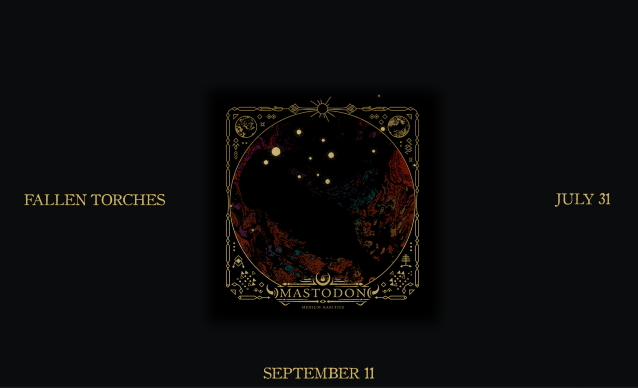 
?Light The Torch? Link in bio