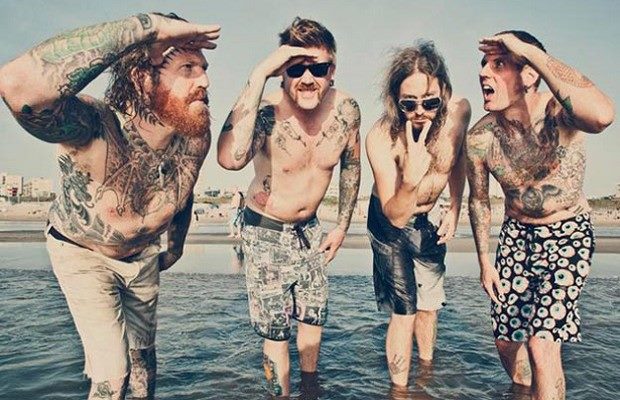 "MASTODON has been busy jamming every day writing and arranging the next studio album. We have quite a few songs and ideas that are taking some time to nail down what we think will make it to the next full-length.

"There will be no more touring this year. We will hit the studio in November to hopefully finish by the end of year."

Asked about the progress of the songwriting sessions for MASTODON's follow-up to 2011's "The Hunter", guitarist Bill Kelliher told Artisan News: "We haven't really come to the lyrical concepts yet. That's usually the last thing that comes. We're usually focused on the music and getting all the parts and everything sounding 'balls to the wall,' you know what I mean?! That's the most important thing. And then once we've got all that settled and recorded, we're always scrambling for lyrics and ideas and stuff. We're getting a little bit better at it, and I think Brann's [Dailor, drums] got a lot of ideas for vocal melodies and stuff like that. I'll play the riff and he'll kind of sing along, and I'm, like, 'OK, that sounds really proggy, but really awesome.' I'm really, really excited about it. But as far as what it's gonna be dealing with, it's a little too early to tell; it's pretty fresh stuff right now. I mean, we've got some demos, but they're really, really rough."

Kelliher also spoke about possible lyrical themes that might be covered on MASTODON's next album. He said: "Death always makes for really good story telling. It's kind of the theme that we have a lot in our music. We've had a lot of friends pass away since the last record. I'm not really sure yet. I think we're kind of focusing more about living on this earth and what would happen if this was your last year to live. I think that's sort of maybe a little bit of what we might be kind of touching on."

He added: "Art reflects life — how you're feeling and your mood. I played a riff for Brann and he was, like, 'That sounds kind of happy. Are we happy now?' I don't know… I am; I'm a pretty happy guy. So that's kind of how we work; it's pretty simple. But we'll have to see. I really like the way 'The Hunter' went; that was not a total change in direction, but we just kind of proved to ourselves that we can just write stuff that we think sounds cool, and it doesn't have to all flow together, it doesn't have to all sound the same. It can be totally different without a concept. So I think that really opened up my mind at least to, like, 'What if I write something like this? Is that gonna be cool?' And we're all on the same page right now with all the songs — the 30 or so songs we've gathered so far. So we'll just have to see how it goes."

MASTODON's latest album, "The Hunter", came out in September 2011 through Reprise Records.