Internationally celebrated heavy rock icons MASTODON have announced a run of European headline dates, kicking off in Berlin, Germany on November 10. The tour also includes dates in Austria, Belgium, Holland, Sweden, Norway, Denmark, Spain and France, with support from RED FANG and RUSSIAN CIRCLES. Fans will also be treated to a guest appearance by longtime friend and collaborator Scott Kelly of NEUROSIS, who will join the band onstage as part of a special setlist. The band will then return to the U.K. for a full tour, culminating in a date at London’s legendary Brixton Academy on December 10.

This will be a special tour — not only does it mark MASTODON's first European headline tour since 2015, but it will also be the first time Scott Kelly has joined the band for a full run of dates. Kelly has lent guest vocals on several MASTODON songs throughout the band's career, featuring on every album since 2004's "Leviathan": "Aqua Dementia", "Blood Mountain"'s "Crystal Skull", the title track from "Crack The Skye", and on "Spectrelight", "Diamond In The Witch House" and "Scorpion Breath" from "The Hunter", "Once More 'Round The Sun" and "Emperor Of Sand", respectively.

"Emperor Of Sand" debuted at No. 7 on the Billboard 200 album chart, making it their third Top 10 album. The follow-up to 2014's "Once More 'Round The Sun" was recorded at The Quarry Recording Studio in Kennesaw, just outside MASTODON's hometown of Atlanta, with producer Brendan O'Brien (PEARL JAM, NEIL YOUNG, AC/DC, RAGE AGAINST THE MACHINE), who first worked with MASTODON on their seminal 2009 album "Crack The Skye".

"Emperor Of Sand" finds MASTODON returning to a deeply imaginative and complex conceptual storyline that ponders the nature of time. Threading together the myth of a man sentenced to death in a majestically malevolent desert, the band conjures the grains of a musical and lyrical odyssey slipping quickly through a cosmic hourglass. 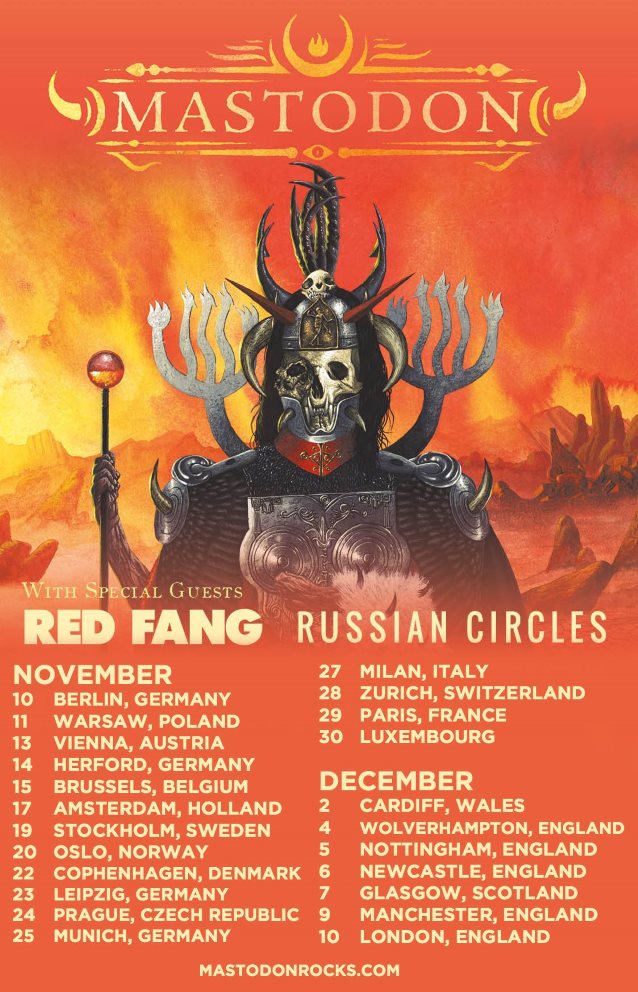