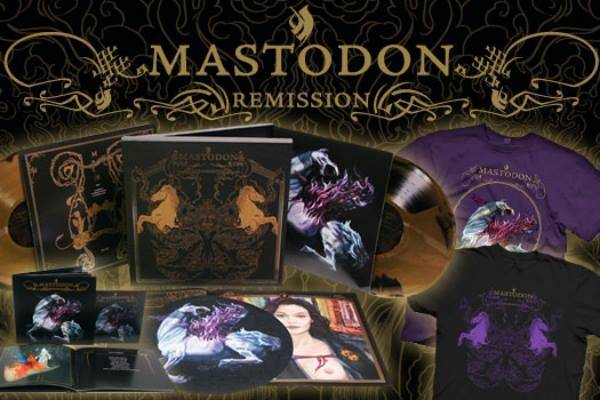 Exploding onto the scene in 2002, MASTODON combined an unparalleled level of musicianship together with songwriting sophistication that simply did not exist amongst their peers. Over a decade after its release, "Remission" remains one of the most important titles in Relapse's rich catalog, and it is with that appreciation that the label is proud to present a super-deluxe version of this classic record put together with the full cooperation of the bandmembers themselves.

"Remission" has been fully remixed by original producer and engineer Matt Bayles and remastered by Ed Brooks at RFI. The CD cover art has been dramatically enhanced to showcase the iconic "Remission" horse in a beautiful custom 3D embossing with a UV gloss, special custom varnish and foil stamping. Additionally, album artist Paul Romano scoured his vaults to unearth 24-plus pages of previously unreleased artwork originally created for the "Remission" album.

The CD version comes with a "Remission" sticker while the 2xLP box set is strictly limited to 2000 copies worldwide and includes a 11"x11" 24-page book featuring the gorgeous new artwork from Paul Romano along with an exclusive etching of the "Remission" horse. A special black/gold vinyl box set edition is available exclusively at Relapse.com and comes with a special, full-color "Remission" turntable slipmat.