Atlanta progressive metallers MASTODON have canceled their previously announced tour with DINOSAUR JR. The dates were scrapped "due to a critical situation of a member of the MASTODON family," according to a statement released by the band. Tickets and VIP upgrades will be refunded at point of purchase.

The members of MASTODON "would like to extend their sincerest thanks to their loyal fans as well as the fans of DINOSAUR JR. for their support and understanding at this time," the statement continues. "The band hopes to make up these shows at a future time, but as of now, no plans for rescheduling have been set. "

MASTODON's tour with DINOSAUR JR. was scheduled to kick off on September 1 in Edmonton, Alberta, Canada.

MASTODON won a Grammy in the "Best Metal Performance" category at the 60th annual Grammy Awards in January at Madison Square Garden in New York City. MASTODON got the nod for the song "Sultan's Curse" from its 2017 album "Emperor Of Sand", with the latter also being nominated for "Best Rock Album." It was the fourth and fifth time MASTODON had received Grammy nominations, having missed out on the three previous occasions — "Colony Of Birchmen" (2007), "Curl Of The Burl" (2012) and "High Road" (2015) — it had been up for the "Best Metal Performance" award.

CANCELLATION ALERT: @mastodonmusic regrets to inform fans that due to a critical situation of a member of the Mastodon family, their upcoming tour with Dinosaur Jr. will be cancelled. Tickets and VIP upgrades will be refunded at point of purchase.

.@mastodonmusic regrets to inform fans that due to a critical situation of a member of the Mastodon family, their upcoming tour with @dinosaurjr will be cancelled.

Tickets and VIP upgrades will be refunded at point of purchase. More info » https://t.co/M4SAKBKegJ pic.twitter.com/gpxYZM8kOq 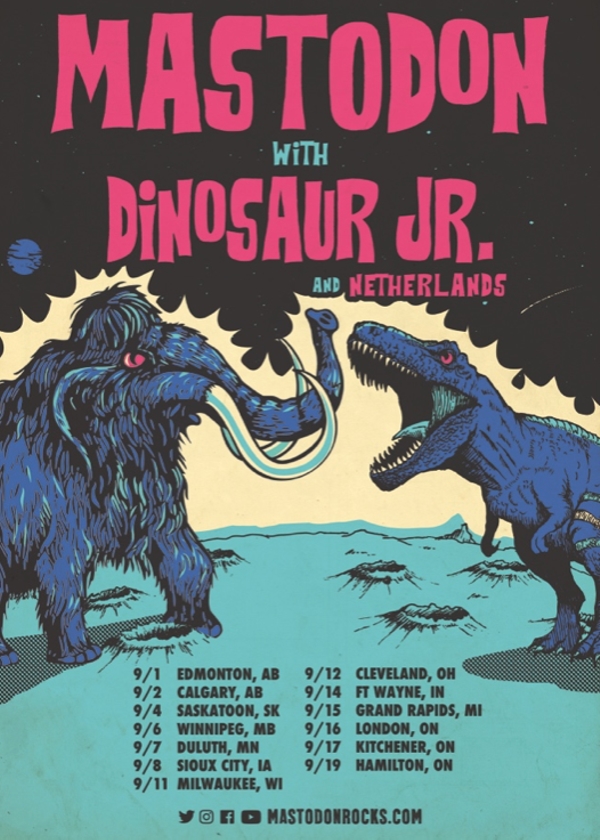