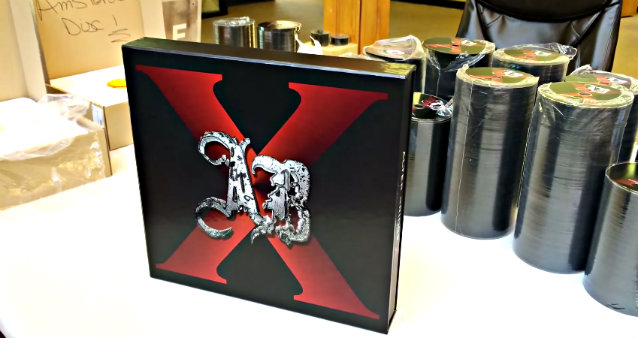 According to The Pulse Of Radio, ALTER BRIDGE has finally made available its new limited edition 27-disc box set, titled "X", in celebration of the band's 10th anniversary. Originally scheduled for release earlier this year, the 3,000-copy set includes all four ALTER BRIDGE studio albums, along with DVD, Blu-ray, and vinyl audio copies of "Live From Amsterdam" and "Live At Wembley", including a 3D version of the latter. Also in the box is every webisode to date, hours of unreleased interviews and documentary footage, a coffee table book, a signed poster, and much more.

Singer Myles Kennedy says it's hard to believe that ALTER BRIDGE has been around for a decade. "It's pretty crazy," he siad. "We've been so busy for the last 10 years that it makes time fly. But you know, it's a beautiful thing when you think about the fact that we're still in the game after 10 years. You know, that means we get to continue to follow our bliss and make music, so we're lucky."

Kennedy said in a statement, "'X' is both a fond look back and a great leap forward after ten years making music together. This collection rewards a precious few of our most ardent fans with almost every thing we’ve ever done — well, everything we want to share! It’s been a tremendous ten years and we look forward to ten more."

ALTER BRIDGE will kick off a fall tour in Louisville, Kentucky on October 4, wrapping up on October 26 in Los Angeles.