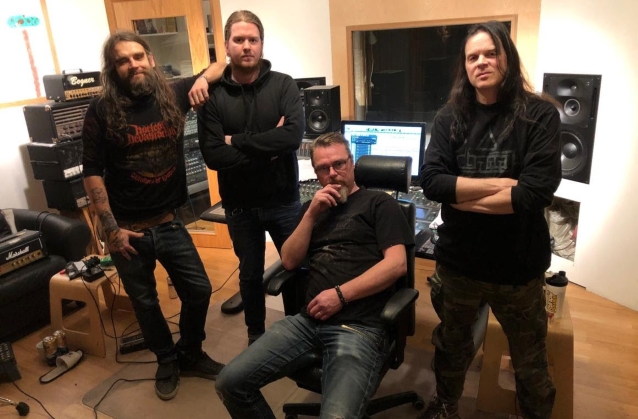 Swedish metal crust punks MARTYRDÖD are in the studio recording their seventh album, "Hexhammaren". The session are taking place once again at Studio Fredman (AT THE GATES, IN FLAMES) in Gothenburg, Sweden with producer Fredrik Nordström.

Tentatively due in May, "Hexhammaren" will be MARTYRDÖD's first release on Century Media Records.

MARTYRDÖD comments: "We're very excited to be back in Studio Fredman and feel that the material for the new album, 'Hexhammaren', might be the strongest stuff we've ever made."

MARTYRDÖD, founded in Stockholm in 2001, has gained a strong following in the crust, punk and metal scenes worldwide with the release of six studio albums. Especially the band's latest studio albums, "Elddop" (2014) and "List" (2016), have stirred up the extreme music scene massively, showing a new side of MARTYRDÖD by entwining more wicked melodies into the metal-induced crust songs. Influenced by acts like WOLFPACK, AT THE GATES, ANTI CIMEX, TOTALITÄR and BATHORY, MARTYRDÖD is not your typical crust band, covering a far wider range of styles without ever losing focus on its roots.