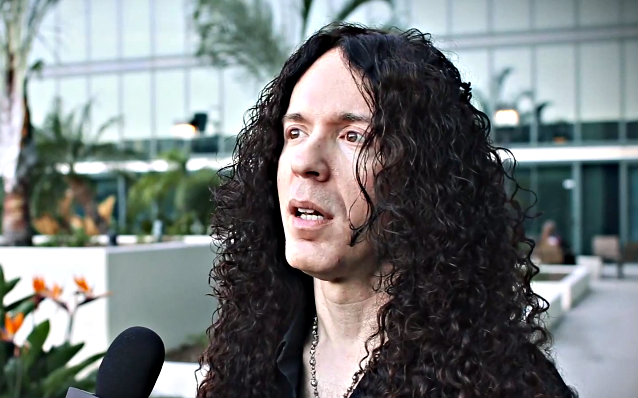 Ivan Chopik of GuitarMessenger.com conducted an interview with former MEGADETH guitarist Marty Friedman at this year's NAMM (National Association Of Music Merchants) show, which took place January 23-26 at the Anaheim Convention Center in Anaheim, California. You can now watch the chat below.

Asked what advice he could offer to guitarists coming into the scene today, trying to make their mark, and find success in the industry, Marty said: "I'm assuming they're already playing in bands and stuff like that.

"First of all, instrumental music — don't even go there. Instrumental music is a tough genre. It's the funnest thing to play, because you don't have to deal with any singers. But in reality, it's a very limited amount of people who can stand it. To be honest with you, I'm not a big fan of instrumental music, myself.

"It sounds hypocritical for someone who's released so many instrumental albums, but I think that's the standard to which I make my instrumental music. It's like for someone who can't stand instrumental music; it has to be at this level of stuff. It's far beyond showing your chops and showing what you can do. And the worst thing is how versatile you are, because I don't want to hear a country song, a blues song, a metal song, a rap song all on the same album. A lot of instrumental guys tend to do that because it's like a résumé, which is fine for a résumé, but not for a listening album.

"To develop your own identity as a guitarist, it's fun to do instrumental stuff, but get into a band.

"I love playing in a band the best.

"There are four songs on my new album, 'Inferno', with vocals, so it's a band vibe on some of it. It's almost like CACOPHONY, [which] had some vocal songs and some instrumental songs. Sort of like that, but there are more instrumentals on 'Inferno'.

"Bands are where it's at… The more you play with your band, the more identity you will have as a guitarist.

"Instrumental music is kind of a dead-end street.

"I hate to be negative, but these are the realities.

"There are only so many people who want to listen to that much guitar and most of them are guitar players.

"I'll tell you, if I hear some fantastic guitar player, I'm either jealous that he's so good and I can't do that, or I think I don't like what he's doing and I would never do it that way; I just don't like the way the guy plays. Those are the only two options. I rarely hear a great guitar player go, 'I like it, I want to listen to it.' I either wish I could play like that, or I don't like the way this guy plays. It's like that.

"I love your support and I appreciate all that.

"If I was only doing instrumental music, I think I would pull my hair out. There's a time and place for it. When I do it, you can bet that there's no stone unturned. It's going to be the rad stuff and it's definitely not a show-off type of thing and it's not an arrogant type of thing.

"I've been making instrumental music; some people expect that from me. So if I'm going to do it, it's going to be something even I'm happy to put out.

"My advice is, collaborate with as many people as you can. Play in a band.

"Being by yourself, doing everything by yourself… unless you're someone like Prince, who's a god, I wouldn't want to put all that work on you. Be part of something great."